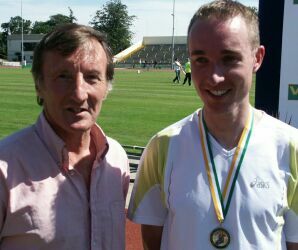 The national championships at Santry over the weekend proved to be an excellent advertisement for track and field athletics.  Glorious sunshine and some breathtaking races once again showed why athletics is is one of the top spectator sports in the world.  What a pity there were not more people present to witness the action.
Leevale athletes once again distinguished themselves over the course of the weekend and most will have been happy with their efforts.  Cathal Lombard was the hot favourite for the 5,000m after a string of 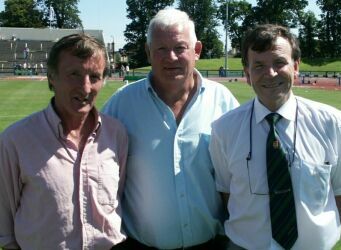 top class performances so far this season.  Mark Kenneally made the early running forcing Cathal to sprint after him after he opened a gap on the rest of the field.  After that it was a series of follow the leader laps until 2k to go when he opened up and quickly put distance between himself and the rest of the field, going on to win in impressive fashion his first senior track title.  To spectators it looked easy but he himself said after the race that it was anything but that.
There was a nice touch at the medal presentation when

the winner of the 5,000m at the nationals in 1973 made the presentation – none other than Leevale man Pat O’Riordan, one of the first members of the then newly formed Leevale back in 1967.
Ailis McSweeney has been one of the most consistent athletes in the country all season.  On Saturday she ran a great race to finish third in the 200m in a new PB of 24.33, with legal following wind.  And on Sunday she was again on fire when she stormed out of the blocks, maintained her stride throughout, and crossed the line in second place in a time of 11.67, again a new PB, with a legal following wind.  Aisling Maunsell was 7th in the 200m.
Jessika Zebo has had her season interrupted by the Leaving Cert and injury, but put all that behind her with a superb display of hurdling to take second in the 100m hurdles, with Niamh Cremin sixth.
Kathleen Fitzgerald, who had a great nine days in Paris at the European Youth Olympics, picked up 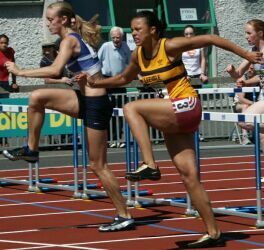 her first senior medal when she finished a great third in the shot putt, with clubmate Deirdre Murphy just a little behind in fifth, the same position she filled in the discus.
Jer O’Donoghue put a season of injury behind him to finish just out of the medals in fourth in the 100m, while Neil Walsh filled a similar position in the triple jump, just 8cm behind the bronze medal winner.
Donna Hosford has been consistent all season and finished fifth in the long jump, a position also filled by Mark Hanrahan in the junior 3,000m, three places ahead of Thomas Maunsell.