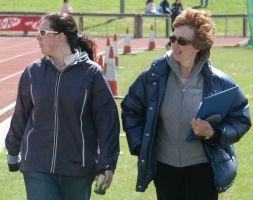 Leevale’s Paul O’Flynn made a big leap in his athletic career on Saturday at the Kit Kat Munster schools track and field championships at CIT. Taking part in the senior long jump his modest first round effort of 4.97m was hardly an indication of what was about ot happen.  His very next jump resulted in a new Munster schools record of 6.94m, and thus deleting the old record held by another Leevale man Michael Hallahan in 1992.
Donna Hosford returned from injury to win 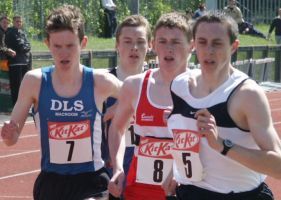 the baton.
Orla Coughlan was equally impressive in the intermediate sprints, winning the 100m and 200m with lots to spare. Amy clarke was third in both races.   Another intermediate to win was Kathleen Fitzgerald in the shot, improving with every outing.
Jessika Zebo repeated her double of last year, winning the senior 100m and 100m hurdles in style.
Ciaran O’Lionaird picked up two silvers in the intermediate 800m and 1,500m, with John Shine third in both, while Mark Hanrahan was a good third in the senior 5,000m.
Well done and best of luck to all the Leevale competitors at next Saturday’s Kit Kat All Ireland schools championships at Tullamore