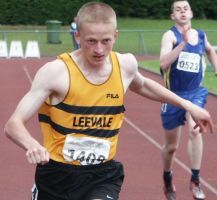 Leevale athletes were in super form at the Lucozade Sport All Ireland championships at Tullamore at the weekend.  Well done to everyone involved in making the championships such a resounding success.
Carl McNamara got his efforts off to a flying start with an excellent second place finish in the 100m hurdles, doing coming from behind in the closing stages to take second.  Later in the day he easily qualified from the heats of the 100m, and followed up with a clear-cut win in the final.  On Sunday he was again impressive in qualifying from the heats of the 200m, going on to win the final, a race he had sewn up by the time he reached the straight.
One of the  first medals of the meet was gained by David Quilligan in the under 14 long jump.  In second place going into the final round he jumped a PB of 5.08m to tie him with an Ulster athlete, but won the competition as he had the better second best.
Amy Clarke also produced her best jump in the last round of the under 17 long jump, but had to settle for second, just 2cm behind the winner.
In the sprints Lorna Buckley was in top form to take second  in the under 16 100m; Orla Coughlan was second under 17, with Amy Clarke 6th;  Aileen Pomphrett was third under 18; and Greg O’Leary was in a class of his own in winning the under 18 100m.
Greg, incidentally, almost never made it to Tullamore.  A back problem resulted in a lot of physio in the week prior to the championships, and there was a lot of soreness after the race.
Claire McSweeney, a niece of the late great Fanahan McSweeney, ran a great race to finish second in the under 17 300m, while Brendan Perrott was unlucky not to get a medal in the under 17 400m, finishing fourth, a fraction of a second behind third.