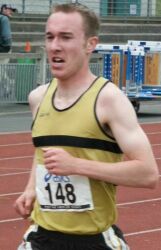 Cathal Lombard, just a couple of weeks after running a superb 28:05.27 for 10,000m, was back on track again tonight in Heusden Belgium for the Grand Prix II meet there.  This time he ran the 5,000m, fully intent on bettering his 13:39.54 set earlier this season.
Running a fearless race he mixed it with four Kenyans throughout, eventually finishing a superb fifth in a time of 13:19.22 – twenty seconds inside his previous best, leaving a class field trailing in his wake.
This time moves him up to second in the Leevale All Time Lists, and to seventh in the Irish All time Lists.
Next outing is the Woodies DIY National championships at Santry next weekend, followed by the World championships in Paris.
Well Done Cathal.