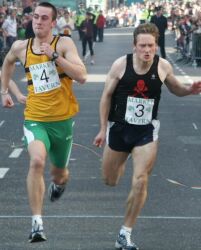 Leevale sprinters were in super form in the past week or so.  Cork’s St. Patrick’s Day Parade again featured the Market Tavern sponsored Fastest Man and Woman in Cork 60m dash.  Also known as the shortest road race in Ireland, both races had cash prizes for all participants.
Defending champion Jer O’Donoghue maintained his title of Fastest in Cork, although photo evidence shows he won by the narrowest of margins.  Ailis McSweeney won the Fastest Woman in Cork title, crossing the finish line full of smiles!!
At Nenagh over the weekend there was plenty to cheer about.  Kathleen Fitzgerald added another national shot title to her collection, winning the under 17 event with a best putt of 12.48m.  Donna Hosford was another to add to her collection with victory in the under 18 long jump with 5.32m.  Lorna Buckley won silver in the under 16 60m.
Carl McNamara won the under 17 60m, and also took silver in the long jump and bronze in the 60m hurdles.  There were two silvers for Greg O’Leary in the under 18 60m and 60m hurdles, while David Killeen won the under 12 60m.  Not a bad day’s work!
More road running saw Roy Fahy finish a close second to Cathal O’Connell in the annual ESB five mile road race over the Curraheen circuit on Sunday morning.
(60m Dash Photos)