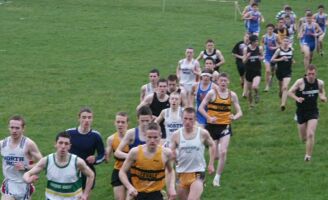 Showers were the order of the day at Midleton CBS Grounds today for the biennial visit of Washington State to Cork.  The weather was wet with a number of showers during the races, while the showers afterwards failed to work!!.  Tipperary man Phil English is the man responsible for bringing these athletes to Ireland.  Last year he was named girls cross country coach for the year 2001.  The 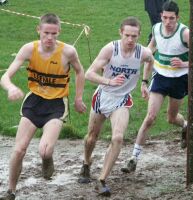 trip brings the party to London, Cork and Tipperary.
Glenbower runner Joyce Curtin set a fast pace in the early stages of the girls race, but was joined before halfway by Susannah Shaw of Washington State.  The pair ran together for a while, but the American was in top form and was soon away on her own, going on to win impressively.  Team Washington then filled the next eight places to win the team contest easily.
Before Christmas Susannah Shaw finished a creditable tenth in the Foot Locker West regional championships, failing by the narrowest of margins to make it to the Foot Locker Nationals.
There was an equally impressive winner of the boys race, which brought together the leading runners in Munster.  After the initial burst at the start the lead group was reduced to three, our own Mark Hanrahan, Jamie McCarthy from Kinsale and Richard Byrne from North Mon. this group stayed together for a couple of laps in the five lap race before Mark eased away from the others who fought hard to stay with him.  For the last two laps Mark was on his own and continued to increase his lead, going on to win by 28 seconds from Jamie.
Ciaran O’Lionaird and Thomas Maunsell were locked together for most of the race before Ciaran got away in the final stages to take fifth behind Paul

Stephens of West Waterford.
Cork teams filled the top three places, with Cork B just ahead of Cork A, both on 27 points.
Refreshments were served afterwards before the prize giving (prizes sponsored by Jury’s Hotel).  Brother Joyce, whose involvement in athletics goes back to the founding days of BLOE, was quick to compliment all the athletes who were focussed enough not to be ‘hung-over’ after the night before.  He said he was not in the least impressed by the young people he witnessed in Washington Street on his way to Jury’s the night before, and encouraged those present to look after themselves in life.
Bro. Joyce had a surprise in store for Ciara Walsh of Glenbower whose 16th birthday is tomorrow.  To mark the occasion he invited all the Washington State boys to give her a ‘birthday kiss’ which they were only too delighted to give!!
School Principal Denis Ring was also on hand to say a few words and remarked he never thought he would never see the day when a Christian Brother would ‘encourage’ such interaction between boys and girls as ‘kissing’!!
Master of ceremonies was Liam O’Brien, who was also chief organiser for the day.
(Results)  (Photos)