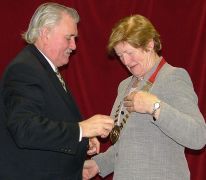 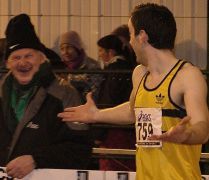 Belated New Year Greetings to all members, supporters and friends.  Here’s wishing everyone a happy and successful 2004.
Several Leevale athletes were in action over the holiday period, and, for some, it was very busy.  The annual Belgooly four mile road race on St. Stephen’s Day was as popular as ever with runners and spectators.  The race ended on a sad note as Belgooly club president Dick Copithorne collapsed and died while the race was in progress.  Leevale athletic club extend sincere sympathy to the Copithorne family and Belgooly club.
The race saw a group of six together until the halfway mark, with Martin McCarthy and Mark Hanrahan well placed.  The second half of the race developed into a duel between Martin and Noel Berkeley, with the pair locked together until 400m to go.  Then Berkeley made a sprint for the line, but the Leevale man dug deep 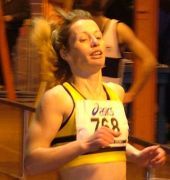 and got ahead on the line to win in a time of 19:24, with Mark Hanrahan fifth in 20:09.
Veteran Leevale man John O’Leary was an easy winner of the over 60 prize in a time of 25:55.
And Carmel Parnell was very much to the fore in the women’s race, winning in a time of 23:33.
The Bandon 5 mile road race on New Year’s Day was run in sunny, but cold, weather conditions.  Thomas Maunsell went off fast with the leaders, but paid the price and fell back a little to finish fourth in 27:18, behind Alan O’Shea of Bantry.
Claire Gibbons made a welcome return to competition and ran well to finish second (30:10) behind Carmel Crowley of Bandon, while Catherine Keohane was third (31:26), and John O’Leary again won the over 60 section (33:23).
There was indoor action in Nenagh, with a lot of Leevale athletes in action, both on the 4th January (AAI Games) and the 11th (Munster senior and junior).

hurdles (9.47); Susan O’Reilly second in the senior 400m (59.45); Darren Coughlan third in the senior 60m (7.26) and third in the 200m (24.39); Darren O’Brien 7th in the 60m (7.52) and 4th in the 200m (24.80); Jessika Zebo 4th in the junior 200m (26.59).
There was a small representation at the Munster cross country championships in Carraig na bhFear yesterday.  A nice sunny day saw John shine run a good race to finish fifth in the junior race, with Alec Daunt 12th and Aaron Hornibrook 28th.  Mark Hanrahan traveled to Cardiff to finish second to Jamie McCarthy, with Keith Linehan and Richard O’Connor also in action.
Carmel Parnell finished a great fourth in the senior race, that also saw Catherine Keohane in the top 15.
Thomas Maunsell, just out of junior ranks, ran well to place 16th in the senior race, one place ahead of Cillian O’Tuama.
Meanwhile, Alan Triggs clocked 15:46 for 5k on New Year’s Day in Washington.
And congratulations to John Smyth for holding the fort as Chairman of Cork county board for so long.  At the Cork AGM he handed over the chain of office to Noreen Murphy after a couple of decades involved with the Board.
Overall, a good start to 2004.