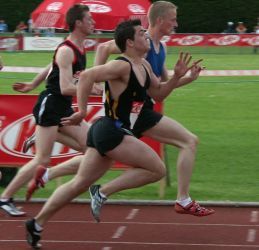 The Kit Kat all Ireland schools championships was one of the most entertaining meets to be held in Ireland for many years.  The meet had everything.  Hot sunshine, hot competition, and Sir Roger Bannister, probably one of the best known names in athletics.
Donna Hosford was up early on Saturday morning for her event, the senior long jump.  And the early start failed to impair her performance as she took the lead with her first jump, and improved throughout the competition to win.
Ciaran O’Lionaird took the lead from the gun in the inter 1,500m and was on his own by halfway as his strong running destroyed the opposition and he won impressively.
Carl McNamara had time to wave to the crowd as he crossed the line to win the senior 200m impressively.  The wave probably cost him a dip under 22sec.
He was drawn in lane 2 for the 100m, with Greg O’Leary in 1, and Ulster’s Mark Hopkins in 3.  All three stormed down the straight and Carl and Mark crossed the line together, with Greg a shade behind in third.  Everyone was agreed that Carl was the winner.  Except the finish judges, who saw it differently!!  They ‘gave’ it to Mark!  A request to the President of

the ISAA Michael Hunt to delay the presentation until the photo finish was viewed, was refused.  So they gave Carl the silver.  Obviously he wanted the meet to run by the clock, which is strange because he kept the senior boys relay runners waiting on the track for ten minutes while he gave a speech!  The photo finish showed Carl was clearly the winner.  This carry-on left a sour taste on two young athletes as well as a lot of spectators. (See Photo above).
Kathleen Fitzgerald added another national title when she won the senior shot – with no slip-ups this week.
Orla Barry had a most successful day, winning the 100m, shot and discus in the wheelchair category.
The meet was action packed throughout and people leaving Tullamore only wanted to know ‘when can we get more of the same’!  Congratulations to Tullamore Harriers on their 50th birthday, and a big thank you to Sir Roger Bannister who added immensely to the occasion. (PHOTOS)