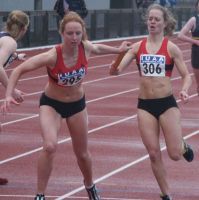 Last weekend proved an exciting one for Leevale athletes.  Cathal Lombard got things off to a flying start when he raced over 5,000m at the Mt. SAC meet in California.  In his first track race of the season he finished sixth in a time of 13:26.00, a good prep for an attempt at the 10k qualifying standard next week.
At the same meet Brendan Fitzgibbon continued his good start to the season with a 3:43.52 1,500m effort to place 8th.
The Irish universities track and field championships featured excellent performances from Leevale runners.  Held at the Mardyke Arena Ailis McSweeney got her season off to a perfect start with victory in the 100m, and made it a double with a runaway win in the 200m.  Another gold followed when she was part of the winning UCC 4x100m team, and then added a silver in the 4x400m.
Niamh Cremin got the championships off to a great start when she won the 100m hurdles, and followed up with silver in the 400m hurdles, just pipped on the line.  She was also part of the 4x400m silver medal winning team. 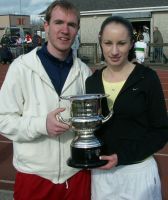 Deirdre Murphy added plenty of points for UCC in the throws. Added to victory in the shot, she was just a whisker behind in second in the discus, won bronze in the weight throw and had a fourth in the hammer.
Brian Murphy, recovering form food poisoning,  won a silver medal in the 400m, with Paddy O’Gorman just behind in second.  They met again in the 4x400m relay, both running the anchor leg.  This time it was Paddy who got the baton in the lead for his CIT team, and he blazed around the track in 48.1 to give CIT their highest placing of the meet, with Brian bringing UCC home in third.
Both UCC teams featured a high proportion of Leevale athletes and it all augurs well for the season ahead.

The annual Leevale Open Sports were held at the CIT on Sunday.  Apart from a few showers the day was dry, sunny, cold and windy.  Typical Irish weather!!  The Sports was a very well supported one and ran reasonably smoothly throughout.
Ailis McSweeney showed her strength by turning out again to win the 100m, with Susan O’Reilly second.  The men’s 100m provided Jer O’Donoghue with the perfect opportunity to show his well being.  And he did it in style, dipping under 11sec against a strong headwind to win easily with Darren coughlan second.
The senior women’s 400m produced a super run by Claire McSweeney who finished a very close third in a time of 57.71.
The men’s 3,000m saw Mark Hanrahan win from Thomas Maunsell, while Ciaran O’Lionaird easily won the junior 1,500m..  Field event wins were recorded by Kathleen Fitzgerald in the senior shot and Donna Hosford in the senior long jump.   Results   Photos
PS Inter Varsity photos will appear after the individual who swiped my umbrella from the finish area of the Mardyke returns it!!