Christopher Murnane was in record form at the Munster indoor track and field championships last weekend.  Taking part in the under 14 60m hurdles he became the latest Leevale athlete to benefit from the coaching skills of former Irish international hurdler Seamus Power, who is also responsible for Derval O’Rourke’s fluent hurdling skill.  Christopher won his hurdles race in a record time of 9.83, and was also third in the 60m.
Claire McSweeney had an excellent win in the under 18 300m, winning in a time of 41.18, while Kathleen Fitzgerald continued her shot putt winning ways in the sane age category with a best throw of 10.95.
Donna Hosford won the under 19 long jump, and was second in the 60m.
Amy Clarke had a busy time, finishing second in the under 18 60m, second in the long jump, and third in the 200m, while Orla Coughlan was third in the under 18 60m and fourth in the 200m..
There was silver for Aoife Joyce in the under 14 long jump and bronze in the 60m.
Bronze medals were won by Paul Horan (under 18 60m & 200m), Aaron Hornibrook (under 19 1,500m), Maura Fitzgerald (under 16 shot), and Denis Metcalfe (under 16 800m).
The girls under 18 relay team won their event, while the under 19’s were second, the under 16’s were also second, and the under 17’s third. 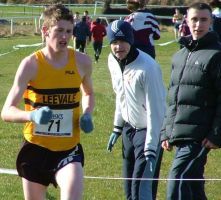 Other performances of note came from Claire Looney (4th U16 60m), Ross Kelly (4th U18 60m and long jump), Louise McArdle (5th U16 60m), Ellen Sheehan (5th U17 60m), Alanna Quinn (5th U15 long jump), and John Collins (5th U16 800m).
Also on Sunday the National inter club cross country championships were held on Roscommon racecourse.  Underfoot conditions were perfect, although the course itself was probably the most boring in years with two ultra long straights on the 2,000m lap course.
Martin McCarthy went into the senior race in great form, and was well in contention for the first couple of laps.  Unfortunately, a stitch forced him to drop out.  A torn stomach muscle was later diagnosed.
Mark Hanrahan set the early pace in the junior race, but paid dearly for it and was overtaken to eventually finish 8th.  John Shine had a good run to finish 21st, while Keith Linehan was 36th and Richard O’Connor 47th to give the team a fourth place finish.
Well done to everyone who competed over the weekend, and also well done to former member Niamh O’Sullivan who makes her international debut in the World cross country championships.