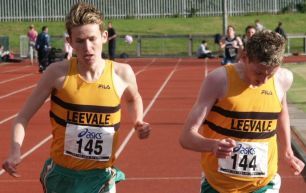 The recent long spell of fine weather came to an abrupt end at the Cork junior track and field championships at CIT on Friday.  A heavy downpour of rain failed to make any impression on the rock hard grass areas.
Best race of the night was the 800m.  Timmy O’Donoghue of Glenbower made the early pace but was overtaken by John Shine, with Ciaran O’Lionaird on his shoulder.  They battled together all the way through the second lap, with little separating them.  Try as he could Ciaran could not get past John who dipped the most on the line to win.
Greg O’Leary had an easy winning double in the 100m and 200m, with Paul Horan second in both.  They later combined with John and Ciaran to win the 4x100m relay.
Orla Coughlan led Amy Clarke home in the 100m, but had to settle for third behind second placed Amy in the 200m.  Kathleen fitzgerald added another shot title to her ever expanding collection, and Aaron Hornibrook won the steeplechase.  (Results). 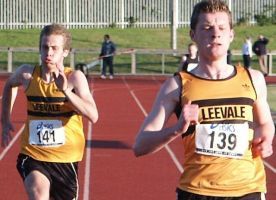 Derval O’Rourke is fast returning to her best and was a class apart in winning the 100m hurdles.
Ailis McSweeney was a member of the winning 4x100m, along with Derval, but earlier clocked 11.79 in the open 100m.
Next weekend the club will be well represented at the Dublin international at Santry on Friday; the Kit Kat Tailteann Games in Tullamore on Saturday; and the Lucozade Sport Munster underage championships at CIT on Saturday and Sunday.
At the Grandons 5 mile road race last Monday Cillian O’Tuama continued his good form for a third place finish, just ahead of Roy Fahy in fourth.  Ronan Crowley was 8th, with Carmel Parnell winning the women’s race in 17th overall, while Catherine Keohane was third woman.  John O’Leary was a good winner of the over 65 section.