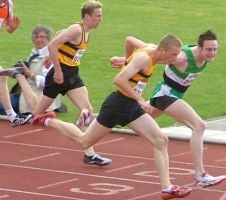 Claire McSweeney was in sparkling form at the Lucozade Sport All Ireland championships at Tullamore over the weekend.  A niece of the late great Fanahan McSweeney Claire wasted little energy in qualifying from her heat of the 300m.  How things changed in the final though.  Blasting out of the blocks she had a distinct lead by the end of the back straight, a lead she maintained into the home stretch.  With an athlete from Malta chasing, as well as Laura Crowe from Tralee, she was up against a quality field, but she was strong enough to hold that lead all the way to the finish for a superb win.  She followed up on Sunday with a silver medal in the 200m.
Greg O’Leary and Carl McNamara were in sluggish form on Saturday, with Greg finishing second in the under 19 100m, while 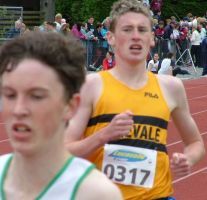 Carl dead heated for first in the under 18 100m.  Derek Duff followed Carl home in third place.
A protracted team meeting on Saturday night brought about the desired results on Sunday with Greg storming home in the 200m for gold, and Carl did likewise in his 200m to win from Derek in second, with Paul Horan eight.
Ciaran added the under 17 1,500m to his All Ireland schools title, but a sprained ankle on Saturday night kept him out of the 800m on Sunday.  Training partner John Shine was just out of the medals with a fourth place finish in the under 19 1,500m, but went one better in the 800m with a good bronze medal. 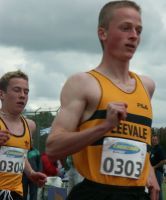