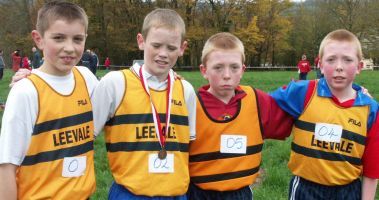 The Cork senior and junior cross country championships were held on a dull lifeless, typical November day at Dromtariffe yesterday.  Underfoot conditions were sticky.
The races on the programme did, however, brighten up the day considerably.  Ciaran O’Lionaird and John Shine ran together for much of the junior men’s race, with Timmy O’Donoghue from Glenbower and Kieran Ryan from St. Finbarrs keeping them company.  Halfway through the last lap Ciaran took off and went on to win comfortably.  John also got away from Timmy to pick up a good silver.  Leevale won the team contest with Alec Daunt coming home in seventh and Chris Horgan 16th.
An ageless Carmel Parnell took things easy for the first lap of the senior women’s race, mainly because a slight injury caused a

little trouble over the past couple of weeks.  After Freda Davoren dropped out at the end of the first lap Louise Cavanagh surged into the lead and kept her effort going to the line to win the race.  Carmel, meanwhile, made steady progress and went into second place by halfway, a position she held to the finish.
Thomas Maunsell was close to the leaders for the first couple of laps of the senior men’s race but then dropped off the pace in his first 10k cross country race.  He was passed in the latter half of the race by Cillian O’Tuama who made a very conservative 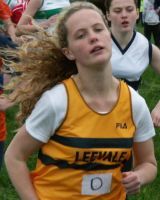 start to the race.  He eventually finished 12th, with Thomas 17th and Ronan Crowley was 26th.
Brian McMahon from Carraig na bhFear won the race after a close duel with Tim Hartley from North Cork
Mark Hanrahan went to London for a 5k cross country race, finishing 19th in 15:44.
Also on the programme was the Cork B cross country championships.  One of the best performances here came form Ruan O’Dheasmhunaigh in the under 17 race.  He battled strongly all the way and was rewarded with an excellent third place finish.
Peter Hanrahan ran strongly in the under 13 race to 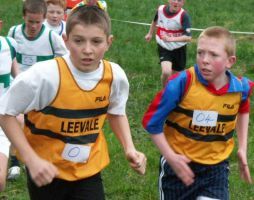 finish fifth, and the Leevale team finished a close second in the team contest, beaten by just two points.
Sean Fogarty was another who battled hard and he was a good fourth in the under 11 race.
Underfoot conditions proved no barrier for Susan O’Flynn in the under 9 race.  She ran a super race to finish second.
Finally, Lisa Collins ran strongly to finish fourth in the under 15 race. Results
The Munster even age championships take place at Pilltown, three miles outside Carrick on Suir, on Sunday next starting at 12 noon.