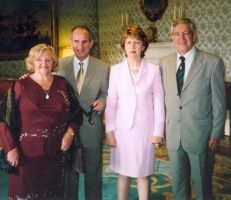 Several athletics officials were recently invited to Aras an Uachtarain for a Garden Party hosted by President Mary McAleese and her husband Martin.  Leevale President Finbarr O’Brien and his wife were amongst the invited guests who represented Community and Sporting groups from all over Ireland.  The occasion honoured people for their contribution to sport and community down through the years.
After a successful sprinting career Finbarr turned his attention to coaching and produced a string of top class sprinters.  At one time his relay teams won 13 of the 14 titles available at the Cork juvenile relay championships, together with a number of placed B teams.  He also guided former Irish rugby star Michael Kiernan to National sprint titles.  Michael, incidentally, still heads the Leevale ranking lists for 200m.
These days Finbarr continues his athletic activities as President of Leevale and a member of the Cork City Sports Committee.  By all accounts an enjoyable day was had by all.
(More Photos)