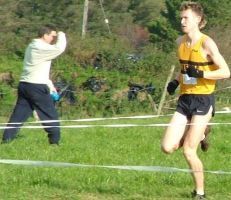 It was back to Skibbereen again today for the Munster cross country championships.  This time it was Castlehaven on a course as tough as that used for the county championships.  The storms, and all the rain that accompanied them over the past few days, made underfoot conditions ‘soft’ on the low lying parts of the course, but the upper stretches provided perfect running ground.  The sunshine made it feel like a summer’s day.  Full marks to Skibbereen athletic club for their organisation of both county and Munster championships.
There were two outstanding wins by Leevale runners at the championships.  Ciaran O’Lionaird renewed rivalry with Irish schools cross country champion David McCarthy in the under 17 race.  Ciaran went off fast, taking David with him.  After 1k they had pulled well clear of the rest of the field, although at this stage the Waterford youth was finding the going tough.  He did stay with 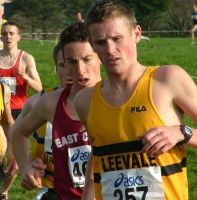 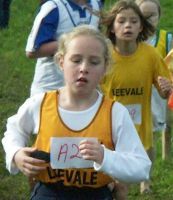 Ciaran for another 1k before Ciaran finally broke clear.  From there to the finish Ciaran stretched his lead and crossed the line a worthy winner.
John Collins was 30th, Denis Metcalfe 31st and David Concannon 37th to give Leevale third team medals.
The combined novice and under 23 race saw Brian McMahon from Carraig na bhFear take an early lead, a lead he held for 1,500m.  However, Mark Hanrahan made good progress on the downhill run and closed fast, taking over the lead at the start of the second of four laps.

On the third lap McMahon weakened further and was overtaken by Sandas Brantus running for Ballynonty in Tipperary.  Novice rules state that Irish internationals are not eligible for novice competition.  But, they say nothing about runners who have competed in the European Cup on the track for a country like Lithuania where Brantus is from!!
Brantus made some headway on the final lap, but it made no impact on Mark’s lead and he crossed the line well in control.
Thomas Maunsell was well placed throughout, running with Colm Turner from Dooneen for much of the way.  Going out the last lap he had moved away from Turner and also over took Fergus Meade from East Cork to go into seventh place overall.  Meade pushed himself in the last 100m and again got past Thomas.  Bernard Twomey was 47th.
John Shine found the going tough in the under 19 race.  He settled in with a leading group of six from the start.  However, by halfway he was drifting back and eventually finished fifth in a race won by Timmy O’Donoghue from Glenbower.
Alec Daunt suffered stitch problems during the race but still finished 17th, while Chris Horgan was a few places further back.
Cliona Hegarty was best of the young brigade in action, finishing 6th in the under 9 race, with the team fourth.
Next on the agenda is the Cork senior and junior cross country championships, together with the B underage championships, at Dromtariffe (on the Mallow – Killarney road) next Sunday.  More Photos to follow.