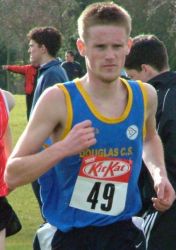 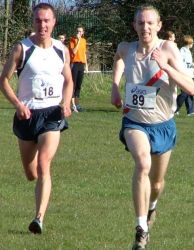 After the long drive to Ballyclare in Antrim it was a relief that the weather remained dry, with perfect underfoot conditions on a relatively flat course.  The championships were well organised, although the finish area was fairly confined.
The senior race saw Mark Hanrahan take the lead from the start, forcing the early pace.  As the race progressed most of the leading bunch fell behind, leaving just four, Andrew Ledwith, Danny Darcy, Richard Yeates and Mark.
The second half of the race saw Mark fall back from the leaders, running for a while with Colm Turner, but was son running on his own in fourth.  The last 800m were eventful as Darcy couldn’t stay with Ledwith who went on to win, while Darcy fell twice in the closing stages to allow Yeates into second, and Mark also passed him for third.  A good run by Mark who almost didn’t make it to the start line with a minor injury in the week before the race.
Full marks to Midleton CBS who won the team contest after some shrewd planning by Liam O’Brien, with Douglas CS second.  Also to Craig Murphy of Douglas CS who won the junior race and Emer O’Connell of St. Angela’s who was third in her junior race.
Ciaran O’Lionaird was clearly of form in the intermediate race – the infection he’s had since Christmas clearly playing havoc with his training/racing.
The short course championships at ALSAA a week ago saw a good performance from Cathal Lombard who is just beginning his racing year after a long lay-off.  The race ended up in a head to head with Robert Connolly whose race fitness told in the end as he outsprinted Cathal.
However, there was a sting in the tail as Cathal was disqualified from second place for not wearing his Leevale singlet – a timely warning to other club members who might be tempted to discard club colours.
Martin McCarthy was also in action last Sunday at the Ballycotton 10 mile road race, finishing third to two Kenyans, as he continued his preparations for the London marathon next month.  Click for Schools Photos