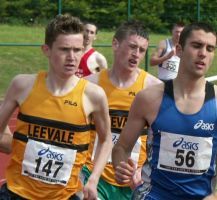 It’s been a hectic couple of weeks for Leevale athletes who continue in brilliant form.  Mark Carroll continues to put his injury problems behind him and he again showed his calibre when he finished second in a 5,000m race in California.  His time of 13:18.75 is well inside the Olympic qualifying time, and means he is well on his way to making the cut for the 10,000m, his preferred distance.
Another to put injury problems on the back burner is Derval O’Rourke and she finished 6th in the 100m hurdles at Hengelo in Holland with a time of 13.42.
At the Munster junior and under 23 championships at a sun drenched Castleisland, Deirdre Murphy went over 40m for the first time when she won the under 23 discus with a best throw of 40.41m, a new CBP and the second best by an Irish woman this year.  She made it a double by also

winning the shot.
Kathleen Fitzgerald made it a shot double by winning the junior event, in spite of fouling three of her four attempts.
The junior 800m saw John Shine finish second and Ciaran O’Lionaird third, while Aaron Hornibrook was second in the 1,500m
At veteran level Carmel Parnell ran a great race in the combined 1,500m and was an easy winner of the over 55 category.
Frank Stam had a successful day, wining the over 40 high jump, and taking silver in the shot, discus and javelin.
And Jerry Murphy had a good win in the over 55 3,000m, together with bronze in the 800m.
The same day the AAI Games were held in Sligo, yet another bad clash of fixtures by AAI.  Here Ailis McSweeney had an excellent win in the 100m, and was just pipped by the narrowest of margins in the 200m.
Jer O’Donoghue continued his run of wins with victory in the A 100m, clocking 10.62, while Greg O’Leary won the D 100m.