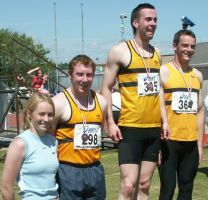 Leevale athletes were in sparkling form over the weekend with outstanding runs by Jer O’Donoghue and Cathal Lombard.
At the Leevale Sports Jer was adamant that he was in the best form of his life and promised some fast times very soon.  On Sunday he showed just what he was talking about as he competed in the Cork senior championships at the CIT.   On a near perfect day for track and field he shattered his PB in the heat of the 100m with a time of 10.69 and a legal following wind of +1.35, with Gordon Kennedy second in 11.08.  Most athletes would consider that a good day’s work, but Jer was back on track shortly after for the final.  And this time he was in even better form as he again demolished his PB with a time of 10.53 (wind +1.97), the second fastest by an Irish sprinter this year (after Gary Ryan 10.51), and the sixth fastest ever by an Irishman.  Plenty more to come for the new Leevale 100m record holder.
Also on Sunday Cathal Lombard traveled to Manchester for the BBC televised 10k road race.  The slow early pace saw Cathal take the 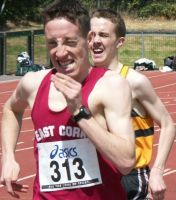 lead and was soon in a commanding lead as the bunch behind either didn’t know him or felt they could rope him in..  It was halfway before they eventually caught him, but they failed to run away from him.  Instead Cathal went with the new leaders and eventually finished a creditable third.  Good for the confidence and a good PR job by him.
Last month Cathal destroyed the Irish record for 10,000m when he finished third in the 10,000m at the Cardinal Invite in California, clocking 27:33.53, well inside MArk Carroll’s old record.
After the disappointment of the London marathon Mark got back on track on Saturday when he won the 3,000m in Boston with a time of 7:52.4. 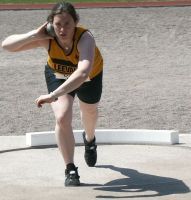 Also at the Cork championships super vet Carmel Parnell won yet another county championship with a great win in the 3,000m.  Ailis McSweeney ran away with the 200m, with Amy Clarke winner of the 100m.
Closest race of the day came in the 1,500m where Fergus Meade of East Cork and Thomas Maunsell of Leevale got away from the field early on.  The pair were almost inseparable for the remainder of the race until Thomas went for home with 200m remaining.  Fergus again took the lead as they entered the home straight, but Thomas dug deep and got past Fergus close to the line to win his first Cork senior title.
Deirdre Murphy picked up a good shot discus double, while Niamh Cremin was unlucky in the 100m hurdles after she lost her stride with two to go with the race at her mercy.
PAddy O’Gorman was another to enjoy the sunshine as he chased Jer home in the 100m, and was flying later when he won the 200m, going under 22 for the first time to greatly improve his standing in the Leevale records list.
Just some of the super performances by Leevale at the weekend.  Check the Results   Photos to follow