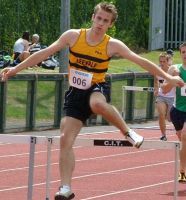 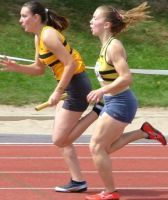 It may have been the August Bank Holiday weekend, and the weather more suitable to the beach than the track, but there was a great turn-out of Leevale athletes for the second round of the Mazda League.  At the end of the day Leevale lead the teams in the Premier women’s league, while the men are third in the Premier men.
As ever there were some great performances.  Ailis McSweeney renewed her rivalry with Ciara Sheehy in the 100m – the thickness of a vest separated them at Nationals.  After a break the pair were away together, but Ailis got ahead in the closing stages to win comfortably.  The placings were reversed in the 200m.
Jer O’Donoghue was another beaten by the thickness of a vest at Nationals, but he was in top form as he won his 100m.
Kathleen Fitzgerald edged close to the 12m mark in the shot, setting a big PB to win with a throw of 12.93. 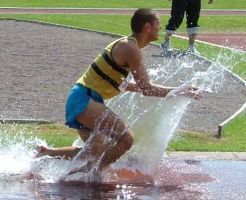 Paddy O’Gorman had the race well under control as he won the 400m, and later anchored the 4x400m team to victory, with great performances from Darren O’Brien, John Shine and Greg O’Leary.
Aisling Maunsell picked up two valuable second place finishes in the 200m and 400m and anchored the 4x400m team to victory after Claire McSweeney, Niamh Cremin and Amy Clarke set the early pace.
There wee excellent wins by Donna Hosford in the long jump and Deirdre Murphy in the discus, while Michael Ruby won the men’s high jump.
Leading vets Carmel Parnell and Paddy Moore were once again in superb form as they finished second in the 3,000m and javelin respectively.