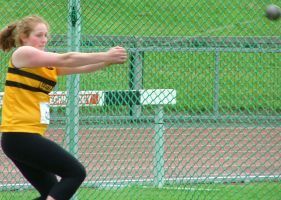 Ciaran O’Lionaird capped a super season on Saturday with victory in the Schools International at Chelmsford, London.  He settled in well behind the leaders in the 1,500m until the last lap.  With 350m remaining he went for home and held his form well to win in a time of 3:55.18 – a new PB for him.  Second place went to David McCarthy from Dungarvan in 3:56.86, also a PB.  Next on the list is the Celtic International in Grangemouth Scotland and the British AAA championships.
Ann Jeffords in the 100m in 1973, Colm Cronin in the triple jump in 1974, and Paul O’Regan in the 400m hurdles in 1982 appear to be the only other Leevale athletes to win a schools international event.
Special mention also to Ann Marie Cronin from Old Abbey who was third in the hammer with a throw of 45.88, behind the winner’s 46.92.
The first round of the Mazda League at the CIT on Sunday 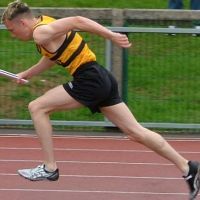 saw Leevale top the points totals for both men and women in the Premier Division.  The women lead on 116 from DSD on 107, Borrisokane 92, KCH 88, Dublin Striders 76 and Raheny 67.  The men’s is much closer with Leevale on 108, Limerick county 107, Clonliffe 106, DSD 95, Clonliffe 85.5.
Paddy O’Gorman had a nice double, winning the 100m and 400m, and Ailis McSweeney did likewise in the 100m and 200m.
Paddy Moore still has the power in the elbow and he had a good win in the javelin.
Carl McNamara won the 200m, and there were wins also in the two relays.
The women also won both relays, while Niamh Cremin won the 100m hurdles, Kathleen Fitzgerald won the shot, and Donna Hosford won the long jump.
It’s all to do again on Sunday week, in spite of it being a Bank Holiday weekend.