St. Augustine’s College Dungarvan couldn’t have been in better shape for the national inter county cross country championships yesterday.  The weather was perfect and the underfoot conditions were ideal.
Highlight of the day was the junior men’s race.  Here Mark Hanrahan had his sights firmly set on a place on the Irish team for the European cross country championships.  Gone are the days when he blasted away in front from the gun.  Instead he settled in behind the leaders, and by the end of the first lap there was a group of six beginning to stretch away from the rest.  Half a lap later eventual winner Mark Christie from Mullingar turned on the power and steadily moved away from the other five.  Mark Hanrahan was unable to stay with the pace and began to drift back into sixth place.  However, he got himself going again and eventually battled his way into third place, within striking distance of second, but the line came too soon.  John Shine was 26th, Alec Daunt 52nd, and Chris Horgan 77th. 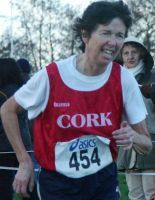 Carmel Parnell, winner of the over 45 title at the Irish and British vets international a week earlier was again in flying form, and for a good part of the race was Cork’s best placed runner.  She was, however, overtaken by Louise Cavanagh  of UCC in the closing stages and had to settle for 15th, one place behind the UCC woman.
Cork’s senior men were a disaster, with most of them under performing.  Best placed was David Doherty from Togher in 26th.  Leevale’s county novice champion thomas Maunsell had a super race to finish 39th – second in the under 23 race, and third Cork placed finisher.  Cillian O’Tuama was 51st.
Fiachra Lombard missed the race.  After traveling back from England where he works he was immediately confined to bed with a stomach bug.  His win in the big Margate international two weeks ago was good enough to gain him selection on the senior men’s team. for the European championships.
The underage races produced a disappointing run from Ciaran O’Lionaird in the under 17 race.  Well placed at half way he couldn’t react when the pace increased, and then was passed by two others in the finishing straight, settling for fifth.  Denis Metcalfe was 83rd, John Collins 96th, and David Concannon 97th.
Shauna Fagan was 31st in the under 11 race, sixth scorer on the Cork team who were second.
Well done to everyone competing in Dungarvan, and especially to the two who have been selected for the European cross country championships.
The Irish Examiner coverage of the national championships was pitiful, as is their coverage of athletics in general.  To do something about it send an e-mail to sport@examiner.ie.  You could also stop buying it.