Tullamore was the venue for the National junior and under 23 championships on Sunday.  After the highs of the BUPA Cork City Sports on Saturday it was bask to basics, so to speak.
Ailis McSweeney renewed her rivalry with Anna Boyle from Ballymena in the under 23 100m and 200m.  However, there was to be no repeat of the previous day.  Both got off to a good start in the 100m, but it was Boyle who edged ahead near the finish to win.  And she repeated the effort in the 200m.  Ailis blasted out of the blocks and had a clear lead coming into the straight.  However, she faded a little, leaving Anna take the lead, and Joanne Cuddihy also passed her on the line to leave her in third.
There was to be no repeat of the All Ireland schools senior 100m for Carl McNamara.  He won the schools by the narrowest of margins from Mark Hopkins from Belfast.  However, Hopkins reversed the placings on Sunday, while Greg  O’Leary finished third, same as the 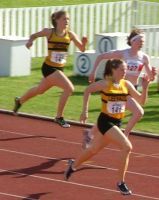 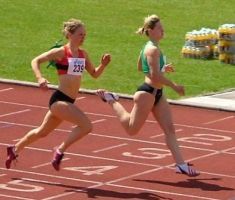 schools.  Carl later was third in the 200m, with Greg fourth and Derek Duff fifth.  Together with Paul Horan they later won the sprint relay in good style.  Carl did have the satisfaction of the fastest 100m time of the day, set in the heats.
Deirdre Murphy just marginally failed to go over 40m in the under 23 discus, winning with a best of 39.90, and she also won silver in the shot.
Kathleen Fitzgerald had another impressive win in the junior shot with a best throw of 11.25.
Donna Hosford took the lead in the junior 100m with her second attempt, but was overtaken in the last round, ending up with the silver, just 4cm behind. 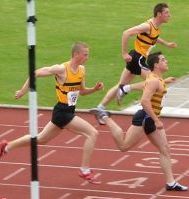 Claire McSweeney had a lot of her season disrupted by injury, but is now getting back to her best.  She went in the 200m and finished a creditable second, with Amy Clarke 5th and Orla coughlan 8th.
Niamh Cremin was second in the under 23 100m hurdles and fourth in the 400m hurdles, with Jessika Zebo fifth in the 400m, while newcomer Whitney Gum won the under 23 hammer.
Aisling Maunsell picked up two fourth place finishes in the under 23 100m and 400m, Ross Kelly was 6th in the junior long jump, and Aaron Hornibrook sixth in the steeplechase.  (Results)