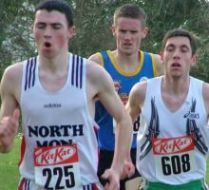 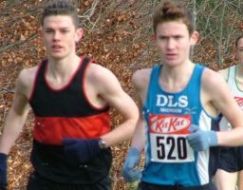 St. Augustine’s Dungarvan never looked better for the Kit Kat Munster schools cross country championships on Saturday.  Some superb performances were witnessed throughout the day.
Andrew Ledwith, Mark Hanrahan and Jamie McCarthy easily moved away from the rest of the field in the senior race.  After 3,000m Ledwith pushed the pace with no response from the others, and got away.  When they did wake up it was too late, although Hanrahan did eventually get going and was able to also put distance between McCarthy and himself.
John Shine had a reasonable race to finish seventh, but Keith Linehan and Richard O’Connor were never at the races.
Ciaran O’Lionaird and David McCarthy also had no problem opening up a big distance between themselves and the rest of the field.  McCarthy moved up a gear with 1,200m remaining and proved the stronger, winning impressively, with O’Lionaird gradually returning to full fitness.
North Mon’s fifteen year winning sequence of senior team titles ended abruptly when Douglas CS won the team contest from Midleton CBS and Thurles CBS. (Results) 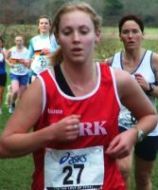 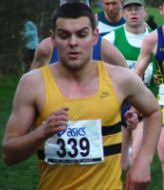 Carmel Parnell had a great run at the National vets cross country championships over the same course a week earlier.  Coming from behind she gradually passed everyone, but the finish line came before she could make inroads into Niamh O’Sullivan’s lead.  Carmel’s second place finish gave her victory in the over 45 category, while Niamh was a member of Leevale before moving to Kerry.
The men’s intermediate race saw reasonable performances from Thomas Maunsell who is adapting to life after junior competition – he was 32nd, with Cillian O’Tuama 40th and Ronan Crowley 76th.
Another former member, Derval O’Rourke got back to competition after injury to place third in the British AAA championships a week ago, and followed up by winning the 60m hurdles at the National indoor championships held in Belfast over the weekend.  Athletics Ireland’s scheduling went a little astray as Derval’s final wasn’t held until 11pm on Saturday night, something that should never happen again.
Ailis McSweeney was involved in a close finish to the 60m, finishing fourth, while Jer O’Donoghue was also fourth in his 60m.  Sadly, RTE’s coverage was well below standard.
Excellent performances also at the Irish university’s indoor championships where Paddy O’Gorman won the 400m; Brian Murphy was second in the 200m; Paul O’Flynn second in the long jump; Jessika Zebo fourth in the 60m and 200m; Niamh Cremin fourth in the 60m hurdles; and Deirdre Murphy winner of the shot.
Well done to everyone for excellent performances all round.