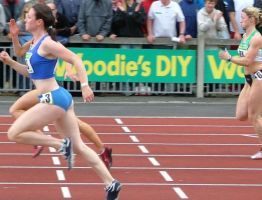 While Cork basked in the sunshine over the weekend it was more like mid-March at the Woodies National track and field championships at Santry over the weekend.  Most of the Leevale competitors returned home more than pleased with their performances, with plenty of PB’s to shout about.
Paddy O’Gorman set two PB’s in the heats and final of the 400m, while Ailis McSweeney claimed two in the 100m and 200m.
The men’s 400m could lay claim to have been the race of the meet – depth wise at any rate.  The heats on Saturday demanded probably the toughest qualifying standard of any event in recent years, with four heats supplying the winner and the four fastest losers to the final.  Paddy showed good form to finish second, and his time of 48.07 was a new PB.  On Sunday the leading quarter 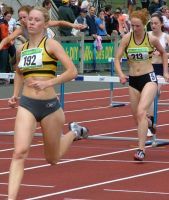 milers in the country were in great form, with Paddy finishing an excellent sixth in 47.79 behind winner Thomas Coman.
Ailis was also on fire.  On Saturday she chased Ciara Sheehy home in the 200m, and her time of 24.41 bettered her old mark.  The 100m on Sunday was a much closer affair as Ailis and Ciara put a good distance between themselves and the rest.  They both flashed across the line together, with Ciara getting the nod by the narrowest of margins – 11.59 to 11.60, and another PB for Ailis.
The men’s 100m mirrored the women’s race.  Only difference is that Jer O’Donoghue built up a big lead in the early stages, but the determined effort of Paul Brizzel saw him overtake him practically on the line – 10.56 to 10.58.
Joe Sweeney of DSD took the lead after a couple of laps in the junior 3,000m and looked to have the race sewn up.  However, Mark

Hanrahan gave chase and gradually closed the gap, taking over the lead with a couple of laps to go, and then running on strongly to win in 8:40.33, a new PB.
Mark Carroll was in a league of his own as he raced to victory in the 5,000m, looking strong throughout.  He followed up in the 1,500m, but stayed way off the pace for the first half.  He ran the last 800m strongly to close considerably, but had to settle for third in a race that was his for the taking.
Paddy Moore had the distinction of being introduced as one of the national winners from 1974, a day after finishing sixth in the 2004 javelin.
Derval O’Rourke had her expected win in the 100m hurdles, with Niamh Cremin running on strongly behind her to take second, and her time of 14.82 was a new PB for her.  She also finished 7th in the 400m hurdles.
Deirdre Murphy won a good bronze in the discus with a best throw of 39.55.  she followed with a fourth place finish in the shot, with Kathleen Fitzgerald one place further back.
Tim O’Herlihy in the discus, Joe Nagle in the shot, Niall Walsh in the triple jump and John Shine in the 800m all competed well.