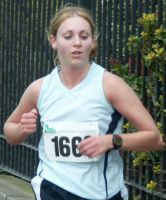 The London marathon on Sunday morning is sure to attract a lot af attention from Leevale followers.  Club members Mark Carroll and Martin McCarthy are included in the star studded line-up for the race that will be screened live on BBC.
Both runners are in great form.  Mark had his first race on the track at the Florida Relays towards the end of March and came through the test with flying colours, winning easily in a time of 13:55.50, some twelve seconds clear of the second runner.  Reports from the States indicate he is in great shape and ready to re-write the Irish marathon record books.
Martin has had a spell of warm weather training, followed by a good win in the UCC 10k road race over a tough Lee Road/Carrigrohane Road circuit ten days ago.  His winning time was 31:26 for a race held in very windy conditions.
Also running London is Valerie Vaughan of Blarney who had a good win in the Ballycotton 10 last month.
The UCC race also saw Catherine Keohane take second in the women’s race in a time of 40:11, and John O’Leary won the over 65 section.
Cathal Lombard has his first track race of the season this week at Mt. SAC.  He had a good run in the big Carlsbad 5k road race in

California a couple of weeks ago, finishing 8th in a time of 13:49.
Brendan Fitzgibbon is another who is showing good early season form.  At the Duke meet in North Carolina he won the 800m in 1:50.14 and the 1,500m in 3:46.38, coming from behind in both races.
Mark Hanrahan completed his cross country season with a good run for the Irish schools team that competed in Brecon Wales, finishing second behind Andrew Ledwith.
The indoor season ended with lot’s of excellent performances by Leevale athletes.  At the All Ireland’s Claire McSweeney had an excellent win in the under 18 300m with a time of 40.9, and also finished a very close second in the 200m with a time of 25.68.  Leevale also won the under 18 and under 19 4x200m relays.
In the under 19 age group Donna Hosford won the long jump with 5.20m, and was third in the 60m in 8.3.  And Kathleen Fitzgerald won the shot with a throw of 10.82.
Claire Looney won a bronze medal in the under 17 60m with a time of 8.1, while the senior men had a good win in the national 4x200m.  Well done to everyone who made it to Nenagh and competed so well.
The Leevale Sports have a start time of 12 noon at the CIT track on Sunday and anyone willing to lend a hand is asked to be there early.