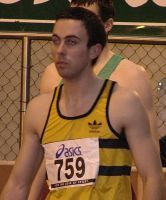 Ailis McSweeney and Jer O’Donoghue made their way to Sheffield today for the British AAA indoor track and field championships and both were successful in reducing their PB’s significantly
Ailis took part in two rounds of the 60m, lowering her PB on both occasions.  In the final she really excelled, finishing second, and, in the process, taking her PB down to 6.48, good enough to win the silver medal.
Jer was also in great form, finishing third in his heat with a time of 6.86, a new PB, and a place in the semi final.  Here he finished seventh in a time of 6.88.
Well done to both, and also to sprints coach John Sheehan who has taken Leevale sprinting to new levels.