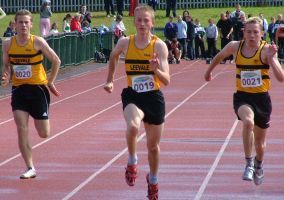 It was a busy weekend for Leevale athletes who were in action at the Dublin international on Friday night, the Kit Kat Tailteann Games on Saturday and the Lucozade Sport Munster underage championships on Saturday and Sunday.
The Munster’s produced some great performances by Leevale athletes.  Greg O’Leary completed a 100m/200m double under 19, while Carl McNamara did likewise under 18, with Derek Duff and Paul Horan placing second and third in both distances.
Amy Clarke won the under 18 100m and 200m, with Orla Coughlan second in both races.  Amy was also third in the long jump.
John Shine ran two strong races to win the under 19 800m and 1,500m, and in the process disappointed one of his ‘victims’ who was confidently telling all and sundry “I am Number 1” throughout their race!!
Donna Hosford was another to complete a double, winning the under 19 100m and setting a new CBP in the long jump.
Clare McSweeney is fast returning to her best form after injury and she was in good form when winning the under 18 300m. 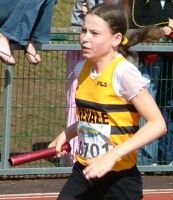 17 800m.
Ciaran ran a super race at the Kit Kat Tailteann Games in Tullamore on Saturday.  Settling in behind the leader for the first half of the race he then took over the lead, and made his move for home about 500m out.  Running on strongly he had the lead entering the home straight, but a fierce battle over the last 100m saw David McCarthy pass him just before the line.  Both recorded new PB’s.  Half an hour later Ciaran ran a leg of the 4x400m and clocked 53.9 – fastest of the quartet.
The dublin international saw more good performances from Jer O’Donoghue, Ailis McSweeney and Paddy O’Gorman.  All three will again be in action at the BUPA Cork City Sports on Saturday afternoon at the Mardyke Arena.  Derval O’Rourke is also in the line-up, together with many of the juniors who will contest the 1,500m.
The national junior and under 23 championships are set for Tullamore on Sunday, while the Munster underage B championships take place in Waterford.