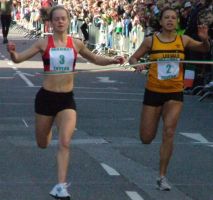 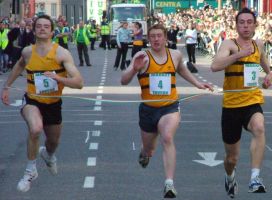 Leevale sprinters took to the roads yesterday for the annual Market Tavern sponsored 60m dash held at the start of the St. Patrick’s Day Parade.
The women’s race was won in good style by Ailis McSweeney (on loan from Leevale to UCC!) with a time of 7.6.  Jessika Zebo was second in 7.8, Orla Coughlan third in 7.9, and Donna Hosford fifth.
Jer O’Donoghue was the winner of the men’s 60m with a time of 6.8, with Paddy O’Gorman second in 7.8, Darren Coughlan third in 7.9. Alan O’Mahony fourth, and Darren O’Brien fifth.
There were cash prizes for each of the runners in each race thanks to the generous sponsorship of The Market Tavern in Anglesea Street.
The indoor championships continue in Nenagh and Leevale is well represented every weekend.  Last weekend the Munster 2×2 Team Competition was held and some excellent results were recorded by Leevale.
Denis O’Sullivan and Colin O’Flynn won the under 12 long jump; Eric Stam and Colin O’Flynn were second in the 60m; Eric Stam and Darragh Walsh were third in the shot.
Ciaran Barry and Sam Lynch won the under 13 long jump and followed up with a win in the 60m.
David Quilligan and Stephen Doyle won the under 15 long jump, while David and Colm Walsh won the 60m.
Alanna Quinn and Lisa collins won the under 15 800m, and also took second place in the long jump.
And, to round off the day, the mixed 4x200m relay was won by the team of Colm Walsh, David Quilligan, Lisa Collins and Alanna Quinn.
Looks like they all enjoyed themselves.