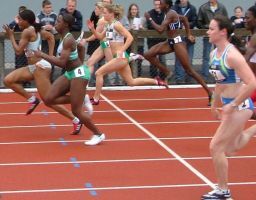 The 53rd BUPA IReland Cork City Sports at the famed Mardyke Arena on Saturday produced a stream of top class performances by Leevale athletes.  It was an afternoon of strong winds and torrential showers, but, at least, it wasn’t cold.  It was acceptable weather to an extent.
Derval O’Rourke was first into action in the 100m hurdles, the first event on the track programme.  Injury has been playing havoc with her Olympic preparations for almost a year.  The tide is turning though and she made a return to something like her best form, finishing 5th in a time of 13.26, almost in line with the third placed runner.
Ailis McSweeney was next to compete in the 100m.  Ailis is having a super year so far and got off to a flying start, up with the leaders for much of the way.  Her efforts got her into third place in a time of 11.67, equaling her best, although the wind at 2.9 was over the limit…  Behind her she had arch rivals Ciara Sheehy and Anna Boyle, so it was an extra good race for her.
The starting at City Sports wasn’t the best, with the men’s 100m finally getting off after three attempts, with one English sprinter 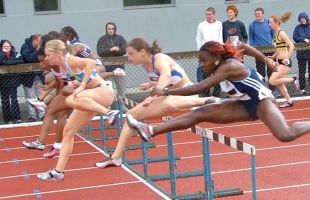 disqualified.  Jer O’Donoghue had another good race to finish 6th in a time of 10.58, the same time as 5th placed Paul Hession.  Gary Ryan from Nenagh won the race in 10.35, which equals Paul Brizzel’s Irish record.  And the wind here was a legal 2.0.  Gary also won the 200m, and picked up the American Trophy as athlete of the meet for his efforts
Paddy O’Gorman had his first outing at City Sports and he expressed himself well pleased with the experience.  Drawn in lane 1 he finished 8th in 48.80, just 0.8 behind 7th placed Thomas Coman.
Freda Davoren ran a confident race in the 1,500m, going clear in the last half lap for a good win, although Maura Prendiville’s pace making efforts in the early stages were largely ignored.  Freda runs as a guest for Leevale in the Mazda league.
Michael Ruby was 6th in the high jump with 1.80 won by Irish record holder Adrian O’Dwyer on 2.21, while Donna Hosford was 7th in

the long jump with 5.61, and Niamh Cremin was 8th in the 100m hurdles with 15.58.
The junior men’s 1,500m had three Leevale representatives, Ciaran O’Lionaird, Mark Hanrahan and John Shine.
Rory Chesser from Ennis set the early pace, but was soon overtaken by Jamie McCarthy from Riverstick, with Ciaran on his shoulder.
As he did last week in the Tailteann Games Ciaran struck for home with 450m remaining.  He opened up a gap on the rest, and they spent the whole last lap trying to close it.  But, unlike last week, they failed, although Mark ran the fastest last lap to come from way back to finish second.  Had he gone earlier the result might well have been different.
Ciaran’s time of 3:55.87 was a PB by some six seconds, while Mark was also inside his PB with 3:57.09.  John was 7th in 4:07.70.
Other events saw Sonia O’Sullivan easily win the 5,000m, while Craig Mottram won the 1,500m.