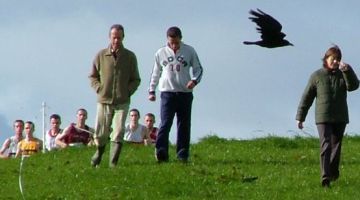 The second section of the Cork cross country championships were held in Skibbereen today.  Weather conditions were perfect with lot’s of warm sunshine.  The venue was the same as last year but the course was altered considerably to allow the younger ages run on relatively flat ground, a big improvement on last year’s mountainous terrain hey had to endure.
First on the menu was the novice championships.  Here Thomas Maunsell and Bernard Twomey were the Leevale representatives.  Thomas was attempting to make up for last week’s effort that saw him lose a winning lead in the last half mile.  He was in the leading group that eventually dwindled down to two, himself and James McCarthy from East Cork.  They raced together for a lap or so before Thomas surged into the lead with a 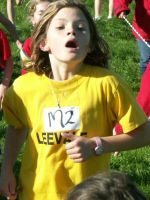 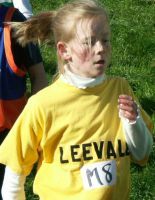 lap remaining, 1,500m.  On this occasion he held the head and battled hard on the hills to win his first cross country title. Bernard also had a better race than last week to finish 8th.
Ciaran O’Lionaird and Alec Daunt set the pace for most of the first of three laps in the under 18 race.  Then it was Ciaran off on his own for the remainder to complete a winning county double.  Alec ran an excellent race for second place, well clear of the third place runner.  Chris Horgan  ran strongly for 11th place and Tadgh McCarthy completed the scoring team to give Leevale team honours.
John Collins and Denis Metcalfe settled in well with the leading group in the under 16 race.  The hills proved tough forcing them to fall back from the leaders.  However, they both kept the effort going throughout and John finished with an excellent fourth place finish, two places ahead of Denis.  David Concannon ran very

well to place 14th, with Conall O’Deasmhunaigh 28th, giving the team a super second place finish.
Eric Curran was in sparkling form in the under 14 race.  He went off fast and kept his place in the leading group all the way.  By halfway that lead was down to two, himself and Patrick Maher from Liscarroll.  Little separated them until the last 200m when the Liscarroll runner managed to get away to win, with Eric a superb second.  Peter Hanrahan was 36th, Dalach O’Dheasmhunaigh 38th, Charlie O’Sullivan 45th and Richard Fogarty 49th.
Ellen Crowley put in a great effort in the under 14 race to finish seventh, while Lisa Collins was 26th and Jenny Shine 48th.  Looking for a

fourth team member!
Aodhaghain O’Deasmhunaigh was 16th in the under 12 race, with Eric Stam 24th, Colin O’Flynn 31st, and Conor Creedon 34th.  Shouldn’t be too long before they start winning team medals.
The under 10 girls were in sparkling form.  Shauna Fagan led the team home with an excellent third place finish, with Trina Hegarty sixth, Sionha Ni dheasmhunaigh seventh, Jennifer O’Lohan ninth, Jennifer O’Sullivan 24th and Aisling Hanrahan 27th.  Needless to say these super performances gave them a well earned team victory.
Two other good efforts came from Cathal Merz in the boys under 10 race and Tia McMahon in the girls under 12 race.
A great day’s work by all concerned.  Well done.  Photos.  CorkAAI Results