The annual Celtic Nations cross country took place at the University of Paisley in Ayr Scotland on Saturday, attracting runners from Ireland Northern Ireland, Scotland and Wales.  A tough course was acceptable for the early races, but then the rain arrived during the women’s race, continued into the men’s race, and got really bad with a shower of hailstones that had the men wishing for gloves amongst other things.
Leevale’s sole representative was Ciaran O’Lionaird in the under 17 race.  Just recovering from a bout of tonsillitis that required a course of antibiotics, he did, needless to say, feel under the weather for much of the race.  However, a 10th place finish, sixth in the Celtic competition proper, was a reasonable performance.
Brendan O’Neill was the winner, storming into the lead with 800m remaining, but then had to sustain a very strong Scottish challenge in the closing stages to win by one second.
Brian McMahon from Carraig na bhFear had his international debut in the under 23 race, held in conjunction with junior race, and the Scottish District championships .  Up with the leaders throughout he only lost contact on the last lap to finish a good second to Tristan Druet from Sligo, with both behind Scottish senior international Phil Mowbray.  Danny Darcy ran very conservatively in the early stages but ate up ground on 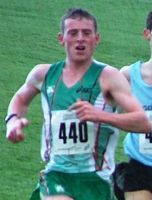 the last lap to finish one place behind Brian.
Scottish international Liz McColgan moved right away from the field in the women’s race, with Azmera Gebrezgi on her shoulder for the first lap.  Liz went on to win easily, and Azmera held on strongly for a Celtic junior win, with Linda Byrne 7th and Orla Drumm from UCC 9th.
Athletics Ireland made a big blunder with the under 17 teams – all the girls team and two of the boys team were overage  !(Click for Celtic Photos)

The FMC International four mile road race in Little Island on Sunday morning was held in perfect running conditions.  A group of eight got away from the rest by the mile mark, and stayed together until a mile to go.  Then Tipperary based Raivis Zakis upped the pace, with Leevale’s  thomas Maunsell in strong pursuit.  Zakis held on for the win in a time of 20:48, with Thomas second in 20:57.  Ronan Crowley was 11th in 21:58.

The Birmingham Indoor Meet  saw another fine performance form Jer O’Donoghue who won his heat of the 60m in a time of 6.87, the fourth fastest of all competitors, and an improvement on earlier times this season, and places him sixth on the Irish All Time indoor list.  Ailis McSweeney’s 7.68 was the third fastest of the day and she also won her heat.  Ailis also ran the 200m in a time of 25.30