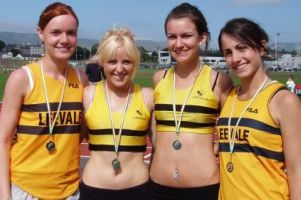 The AAI Juvenile Inter club Relays held in Sligo IT at the weekend. It  was a bit of a trek to Sligo, but Leevale traveled in force with athletes and supporters, resulting in a total of 16 relay teams competing there. The day started off overcast and cool while Leevale started the day off with a bronze in the under 18 girls 4 x 300m relay. This was to be the only bronze of the day and was followed by a string for fine performances by the Girls and Boys under 9 who both ran exceptionally well to secure silver in both races. A special mention is required for both Grainne Kerrisk and Aisling McCarthy. Grainne had just returned from her holiday the night before and Aisling interrupted her holiday in Italy to fly home for the relay. The under 11 Girls, otherwise know as the “dream team” then took to the track and gave a confident display of relay running with sublime batten changes which earned them the clubs first Gold Medal of the day. The under 15 Boys who have run well as a team all year finished a strong second in their relay.
By lunch time  Leevale had secured 5 medals from the morning session 1 Gold, 3 Silver and 1 Bronze. Then the sun started to shine. First on the track for the afternoon session were the Girls under 10. This team has looked promising all year and on the day they delivered with an outstanding run to win in style. They were followed by the boys under 10 who had worked hard on their batten changes all day, this focus and effort paid off well and the boys were unlucky to be pipped into second place on the line. The Girls under 12 were next on track. The girls ran the first three legs well, however when Jessie Flynn took the batten at the top of the final straight she found herself in fifth place, then started the individual performance of the day.  Jessie started to chase, after 30 meters she has overtaken two athletes to get up to third, she kept on going, by 60 meters she was second, she kept on going, by 80 meter she was first and she kept on going to comfortably win the race for the team. There was barely chance to draw breath when the boys under 12 took to the track. There was a quite confidence in this team, which was justified on the day. Peter Swanton and Sean Fogarty ran the first two legs well, passing the baton to Darragh Wash for the third leg. Darragh attached the bend and left all the other athletes in his wake to had over to Denis O’Sullivan in the lead. Once Denis took the baton in first place there was only going to be one result and Leevale secured their fourth Gold of the day. Last on the track for Leevale were the under 18 girls for their 4 4x100m relay. The girls once again ran well to finish second securing their second medal of the day.
By the end of the day Leevale athletes had won 4 Gold, 5 Silver and 1 Bronze medals, making Leevale one of the most successful clubs at this years All Ireland Inter club Relays.

The AAI individual events took place in Sligo IT on Sunday the 18th July. Leevale had a large contingent of athletes qualified for these events. Eirne Ni Dheasmhunaigh competed in the girls under 9 and won the sprint, finished second in the long jump and fourth in the ball through. These results gave Eirne the distinction of finishing second overall athlete in the under 9 girls. Zack Gibbons competed in the under 12 boys shot put. He won this event with a new PB of 9.36m. Zack is now the reigning U12 all Ireland shot put champion both indoor and outdoor. Rebecca Corbett competed in the Girls under 13 80m and won comfortable to secure another gold medal.
A special word of thanks to all the athletes and their families who traveled to Sligo, your dedication, effort and support made this a weekend that will live in the memories of all who attended.
Report courtesy of Donal.    Relay Photos