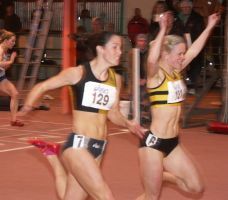 Leevale athletes were in tremendous form at the national indoor track and field championships in Nenagh.  Their performances proved once again just what a fast track there is in Nenagh, and, for a minuscule outlay, this venue could be one of the best around.  That outlay could only come from Public funds, and would require inspired thinking from our Public Representatives (which, of course, is a long way off!).
Ailis McSweeney proved once again that she is the best sprinter in the country. Recent performances from her rivals showed that they were closing rapidly on her.  However, with the pressure on, she responded magnificently.  She was best away from the blocks and maintained her form throughout for a super win that guarantees her selection for the European indoor championships next month. 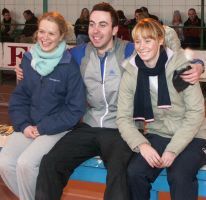 Jer O’Donoghue had to overcome a bout of flu in recent days before he could line up for the men’s 60m.  Three false starts that resulted in one DQ failed to unsettle him and he stormed to victory.  His winning time was just one hundredth of a second outside the European qualifying standard, a time that should come sooner rather than later.
Derval O’Rourke made it three golds when she won the 60m hurdles unchallenged for one of the most impressive wins of the weekend.
Mark Hanrahan settled in well in the 3,000m and stormed into the lead in the closing stages to win impressively.
Ciaran O’Lionaird hit the front from the gun in the 1,500m and tried to lead all the way.  He was passed on the last lap by arch rival David McCarthy and had to settle for second.
Deirdre Murphy won bronze in the shot putt; Jessika Zebo was fourth in the 400m; Derek Duff was second in the B 200m; and Joseph Nagle was fifth in the weight for distance.
An excellent weekend’s work by everyone.