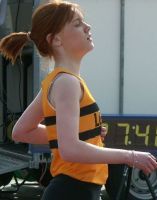 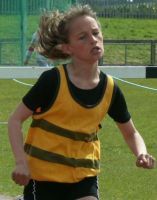 Another weekend of action at the Cork IT track produced more thrilling performances from Leevale athletes.  The Evening Echo South Munster schools on Saturday and the Cork championships on Sunday showed our members are right on track for the Munster and All Ireland championships in a few weeks time.
On Saturday there was a tremendous double by Derek Duff in the senior sprints.  He scored a superb winning double in the 100m and 200m, with Greg O’Leary second in both and Paul Horan third in the 100m.
Claire Looney was another to record a sparkling double, winning the intermediate 100m and 200m, with Clare O’Mahony second in the 200m, and third in the 100m, just behind  Louise McArdle.
Ciaran O’Lionaird led from gun to tape to win the senior 1,500m from John Shine, while Eric Curran was equally impressive in winning the junior 1,500m.. 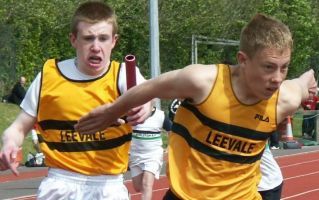 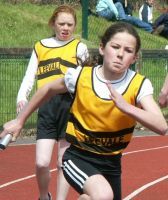 Claire Mcsweeney was never threatened in winning the senior 400m, and Kate Fitzgerald was equally impressive in winning the senior shot.
Alec Daunt took home double silver after finishing second in the senior steeple and javelin.
Next stop is the Kit Kat Munster schools at CIT next Saturday.
There was another great turn-out of Leevale athletes on Sunday at the second section of the Cork championships.  It was another marathon session lasting from 10.30am to 6pm.
Eirne Ni Dheasmhunaigh, Clare O’Mahony and David Quilligan recorded impressive doubles had impressive doubles, while Louise McArdle, Mera O’Connor, Denis O’Sullivan, Ciaran O’Lionaird, and David Killeen all won single events.  Relay wins came form the girls under 9, 11, 17 and 19 teams, as well as the boys under 9 and 15.  The girls under 18 4x300m and under 19 4x400m teams also brought home gold.  Photos from Saturday and Sunday are Here   Complete Results

are Here   A full list of Leevale medal winners can be seen by clicking Here
Also on Saturday Mark Hanrahanagain competed in the Irish Milers Club 1,500m at Irishtown Stadium and took three seconds off his PB with a runaway win in the 1,500m in a time of 3:52.54.
Sean Conroy came within a whisker of winning the 1,500m at the Horizon League in Indianapolis.  He finished second in 3:50.58, a fraction of a second behind the winner.  He did, however, score a runaway win in the steeplechase, and his performances won him the Outstanding Track Performer of the Meet.
The Cork senior championships take place on Sunday at CIT and electronic timing will again be used.  It will also be used on Saturday at the schools.