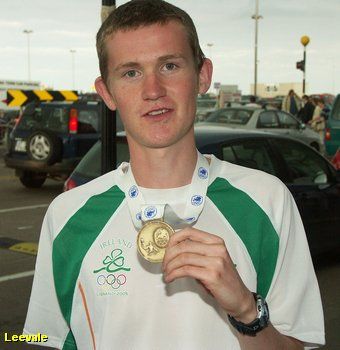 Ciaran O’Lionaird ran a super race to win the bronze medal at the European Youth Olympics.  Running in the 1,500m he was well placed throughout the race, and then made his move with 450m remaining.  It nearly worked, but the fast finishing English and French runners had other ideas, and they proved stronger on the day, taking the first two places.  Well done to Ciaran.
The small Irish team won a fantastic four medals over the week, silver for David McCarthy, silver for Amy Foster, and bronze for Eoin Healy.  It could have been six, with Gerard O’Reilly just a fraction of a second off the medals in the 200m, and Brendan O’Neill’s unfortunate fall in the 3,000m.  It reinforces athletics as Ireland’s most successful sport at international level.  Sooner or later the Olympic Council of Ireland and the Irish Sports Council will have to realise that a properly supported athletics will deliver more than any other Irish sport.
The organisational skills of the Olympic Council of Ireland did not amount to much in Italy as they forced the five Irish boys into one cramped room with no air conditioning for the whole week.
More pictures of the homecoming by clicking Here
Celebrations at Cork airport and in Inchigeelagh were superbly organised by family and friends.
Best of luck to Ciaran who competes this week in the World Youth championships in Marrakech Morocco.
Also in action is Ailis McSweeney who is in Erfurt Germany for the European under 23 championships.  Ailis is just coming into top form and was flying at the BUPA Cork City Sports, where she finished fourth in the 100m. The following day she won the 100m and was a close second in the 200m at the national under 23 championships at CIT.  The very best of luck to her.
Jer O’Donoghue was another in fine form at Cork City Sports, while Mark Carroll proved best of the Irish in the 3,000m.  On Saturday he easily won the 5,000m at the British AAA championships in 13:48, and is building up nicely for another tilt at the marathon.
Derval O’Rourke again showed her like of racing at the Mardyke with another superb display of hurdling, and her time of 12.99, although wind assisted, was her second fastest ever.
John Shine fought hard in the junior 1,500m, and finished a creditable second to Daire Birmingham from Raheny.
Well done to the organising committee of the BUPA Cork City sports on a marvelous presentation, and we all look forward to next year’s offering.
At the national junior’s Derek Duff put in a tremendous run to win the 100m in 21.79, a time that moves him to 2nd on the Leevale all time list.  His time was a fraction outside the european junior qualifying time of 22.70.  He was also third in the 200m, while Donna Hosford was third in the long jump.