Leevale athletes were in superb form over the past week.  At the indoor international in Cardiff there were six Leevale members competing on the Irish team, Ailis McSweeney, Derval O’Rourke, Jer O’Donoghue, Ciaran O’Lionaird, Derek Duff and Carl McNamara.

Highlight of the meet was the performance of Ciaran who competed in the junior 1,500m.  This race was held in conjunction with the senior race, with the seniors lining up on the first line and the juniors behind at the start.  In only his third ever indoor race Ciaran settled in well behind the leaders – two senior internationals.  He overtook them in the closing stages but was overtaken again to finish third.  His time of 3:50.86 bettered his outdoor PB by almost five seconds and the effort earned him the Performance of the Meet award.
Ailis McSweeney found one too good for her in the 60m sprint, but her time of 7.50 was just a fraction outside her 7.48 best.  Immediately after her race she dashed off to Glasgow for the Scottish indoor championships where she won the 60m in the exact same 7.50 seconds. 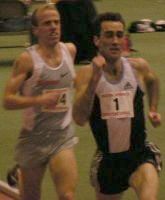 Derval O’Rourke struggled with injury in her preparations for the Athens Olympics, but has now thankfully put those problems behind her.  She was in top form in winning the 60m hurdles in a time of 8.24, and also added a new PB in the 60m flat with a time of 7.59.
Jer O’Donoghue took his place in the men’s 60m and continued his consistent start to the season by clocking 7.84 for fourth place.
Derek Duff was third in the junior 60m with a time of 7.24 and Carl McNamara was third in the junior 200m in 23.17.
The All Ireland B cross country championships were held in Athlone last Sunday and here Eric Curran put in a super performance to finish fifth in the under 15 race.
Another to put injury problems behind him is Mark Carroll.  Competing in Boston on Friday night he showed he still has some of that basic speed as well as tons of strength when he raced over 3,000m.  The race turned into a head-to-head battle with Alan Webb, but our man hit the front with 400m remaining and held that lead all the way to the line to add another superb win to his collection.  His winning time was 7:46.60.  More race photos are at Let’sRun.com
Looks like 2005 will be another brilliant year for Leevale athletes.  Well done to everyone.