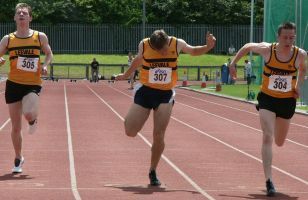 Another hectic weekend of activity on the athletics front.  Leevale sprinters were again in top form competing at the Munster championships at CIT and at the Europa Cup match in Portugal.  Ailis McSweeney and Jer O’Donoghue were both in action in the sprint relays in Portugal, and Derval O’Rourke competed in the 100m hurdles, as well as the relay.
The women’s relay team finished fifth in a time of 44.68 a new Irish record, giving an average time of 11.17 for each runner.  The men’s team was second.  Both Ailis and Jer also competed well in the B 100m races.
Derval’s performance in the 100m hurdles was superb.  And thanks to the BBC (RTE probably didn’t even know it was on!) we were all able to see the race on television.  Her time of 13.12 is a big improvement on previous races this season, and a fraction outside her best.  With the season just about to get into full swing she is sure to further reduce that time.  Her performance again questions the Irish Sports Council’s decision to reduce her grant aid.  A response by them would be appreciated.
Ciaran O’Lionaird competed in the junior international in Mannheim in Germany and set a new PB for 1,500m of 3:50.41 in fifth place.  He is set to compete in the European Youth Olympics in Italy in two weeks. 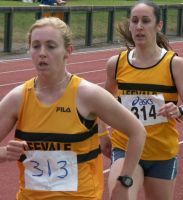 The Munster senior championships at CIT were held in glorious sunshine.  A feature of the meet was the performance of Derek Duff who completed a superb double in winning the 100m and 200m.  In the 100m he lead home a Leevale 1-2-3 with Darren O’Donovan second and Greg O’Leary third.
Paddy O’Gorman put injury problems behind him with a comfortable win in the 400m, dipping under 50 seconds in the process.
Catherine Keohane ran a confident race in the 1,500m, pulling away from Jennifer Goggin on the last lap  for  Leevale 1-2.
John Shine tried hard to close on the leaders in the closing stages of the 800m but had to settle for third.
Aisling Maunsell went out very fast in the 400m and built up a good lead.  However, she died a little in the last 100m and finished third.  In the 800m she was fourth with 100m to go, but she rallied in the closing stages and closed on the leader Orla Power from Carrick on Suir.  The line came too soon and she had to settle for second, 0.17 seconds in arrears.
Paddy Moore won yet another javelin title, a great achievement for a guy in his mid fifties.
And, to round off a good day there were wins by the men’s sprint relay team and the women’s 4x400m relay team.
The Kit Kat All Ireland schools championships at Tullamore saw more good results by Leevale athletes.  Derek Duff came up against a good one in the 100m and 200m and had to settle for second in both races.  He later added another silver when glanmire CC, with Derek, Greg O’Leary and Paul Horan on board, were beaten in a photo finish.
Ciaran O’Lionaird finished second in the 1,500m, run at pedestrian pace for the first two laps.  A week later he competed in the BMC 800m in Watford and set a new PB in spite of running 750m with an open lace.
Sisters Kathleen and Maura Fitzgerald won two excellent silver medals, Kathleen in the senior shot, and Maura in the intermediate shot.
Donna Hosford couldn’t quite match last year’s form, but still managed second place in the senior long jump.
Orla Barry won two excellent gold medals in the wheelchair shot and discus, and was a close second in the 100m, while David Berry was second in the shot.
Well done to all the members who competed in the Munster juvenile championships at CIT.  Results included E Ni Dheasmhunaigh 2nd in the under 9 60m and first in the long jump; J O’Flynn second in the under 12 80m; J Murphy first in the under 13 high jump; R Corbett first in the under 13 80m; D O’sullivan second in the under 12 80m, third in the long jump, and third in the 600m; and Z Gibbons third in the under 12 shot.