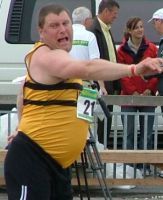 Derval O’Rourke overcame all kinds of obstacles before running her heat of the 100m hurdles at the World championships in Helsinki yesterday.  A deluge of rain caused a two hour delay in the running of her heat, and meant she had to go that extra time without food.  Her time of 13.00 is her second fastest legal time and follows a string of impressive performances in recent weeks.
At the Woodies DIY national championships in Santry Derval was in outstanding form as she retained her 100m hurdles title, and then followed up with an equally impressive performance in the 100m, finishing second to Anna Boyle, beaten by just one hundredth of a second.  A week later she won the 100m hurdles at the Dublin international in impressive style.
Other excellent performances at the nationals came from Jer O’Donoghue who was second in the 100m behind Gary Ryan; Donna Hosford who put her Leaving Cert efforts behind her to win the long jump; Ailis McSweeney who was third in the 200m and fourth in the 100m; Ciaran O’Lionaird who cruised to victory in the junior 3,000m; Niamh Cremin who was fourth in the 100m hurdles; Darren O’Donovan eight in the 100m; Derek Duff eight in the 200m; Joe Nagle seventh in the shot; and Paddy Moore eight

in the javelin.
Both Jer and Ailis followed up with two more excellent performances at the Dublin international, with Jer winning his 100m from Gary ryan and Ailis winning her 100m, as well as placing third in the 200m in 23.83, a new PB.
The Mazda League will see our women’s team qualifying for the finals in Tullamore next week, but it looks like the men’s team will not make it.  A string of withdrawals, for one reason or another, meant the team was understrength, and a sparkling 100m/200m double by Jer O’Donoghue was not enough.
Ciaran O’Lionaird finished a close second in the 1,500m at the Celtic international in Wales on Saturday, beaten by just two hundredths of a second, while John Shine competed in the British Milers Club 1,500m at Crystal Palace in London, finishing 12th in the 1,500m.
Well done also to Joe Nagle who won silver medals in the shot and distance throw in the over 35 category at the English masters championships.
Crystal Palace photos