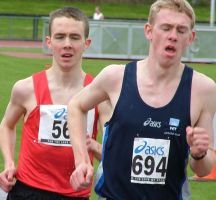 The 2005 track and field season opened in a downpour at the CIT on Wednesday for the Irish IT championships.  It cleared a little, but the rain kept arriving.
Leevale’s Paddy O’Gorman had a busy day, easily qualifying for the 100m final and then winning the final to give CIT maximum points.  He followed up by making it a double, winning his main event, the 400m in 49.1.  To round off the day he was a member of the winning CIT teams in the 4x100m and 4x400m relays.
Carl McNamara cruised to victory in the 200m, and was also a member of the two relay teams.
Thomas Maunsell was on the shoulder of race leader Dan Mulhare from Waterford IT for most f the 3,000m, but had no answer when Mulhare sprinted for home with 150m remaining to win.  Thomas later made amends when he won the 1,500m.
John Hobbs showed he had lost none of his throwing ability with a comfortable win in the shot and a second place finish in the discus.