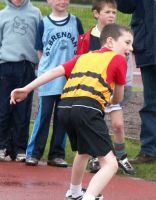 The annual Leevale Open Sports were held at the Cork IT track on Sunday and were, once again, a resounding success.  The months of hard work put in by the organising committee was very visible as everything went according to plan.  There was an impressive turn-out by Leevale athletes, especially in the younger ages.  The only drawback was the weather with heavy overnight rain failing to clear in time.  It was, however, a warm day and relatively wind free, and many races were held in ideal running conditions.
One race that did benefit from a clearance was the combined junior/ under 23 1,500m.  Here Jamie McCarthy set the early pace with Ciaran O’Lionaird on his shoulder throughout.  Everything changed with 200m to go when Mark Hanrahan hit the front and no one could go with him.  He went on to record an easy win from McCarthy.  Mark was presented with the Kevin Barry memorial cup for Performance of the Meet.
Raheny Shamrocks from Dublin brought a bus load of athletes to the meet and were rewarded with some 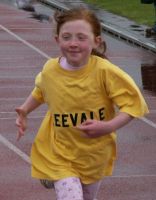 excellent performances.  Highlight was the 3,000m where Mark Kirwan made the running throughout.  The Cork challenge never really materialised and the race belonged to Raheny. Liam O’Halloran took over the lead coming into the home straight but Kirwan fought back strongly and went ahead in the closing stages to win.
Greg O’Leary blasted the first half of the 400m and then held off his rivals in the home straight to win in 49.72.
Ailis McSweeney and Darren O’Donovan were easy winners of the sprints, although the turn-out by sprinters was a big disappointment.  Derek Duff made it a treble with a good win in the junior 100m.
The underage events saw some great performances by Leevale athletes, and the relay teams were especially good.  It looks like it will be another successful season ahead for all of them.
Leevale appreciates the support of all the clubs who made the journey on Sunday and hope the