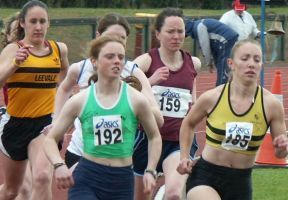 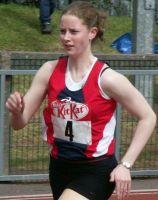 Mark Hanrahan was in action in Manchester for the British Milers Club meet at the weekend.  After two runaway victories in the Irish Milers Club meets over 1,500m in recent weeks he made the move up to 3,000m on this occasion.  A fast well paced race  was won by Nick Mccormick in 7:56.57, with Mark well placed in seventh place with a time of 8:14.45, a massive 26 seconds faster than he ever ran before.
Ailis McSweeney got her season off to a flyer with double success in the 100m and 200m at the AAI Games in Irishtown, clocking 11.75 and 24.85 for the distances that saw her well clear of her rivals.
Mark Carroll finished sixth in a 10k road race in Central Park New York on Sunday.  His time of 29:18 was one second and one place better than Keith Kelly in a race won by Craig Mottram in 28:28. 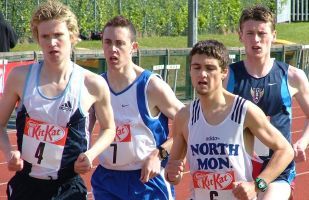 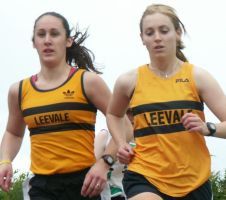 The Cork senior championships at CIT on Sunday saw veteran Paddy Moore win yet another javelin title – his first way back in the 1960’s!  He threw a respectable 27.50m.
There was a 1-2-3 for Leevale in the 200m won by Clare McSweeney in 25.72 from Jessika Zebo and Katey Byrd.  Karl McNamara won the men’s 200m in 22.78.
Catherine Keohane won a closely fought 1,500m from Jennifer Goggin, while Aisling Maunsell led most of the way to win the 800m, with Jennifer third
Frank Stam won the discus and Joe Nagle won the shot and was second in the 56lb for distance..
On Saturday the Kit Kat Munster schools championships were held at the CIT with another superb display by Leevale athletes.  Derek Duff had plenty to spare in winning the senior 100m in 10.97 and 200m in 22.20, and had a lot to say in glanmire CC’s win in the relay.
Ciaran O’Lionaird led into the straight in the 800m, but was collared by Brian Markham in the closing

stages.  The placings were reversed in the 1,500m as Ciaran finished well clear, while John Shine was third in both races.
Kathleen Fitzgerald won another schools shot title, while her younger sister Maura was successful in the intermediate grade.
Claire McSweeney ran another confident race to win the senior 400m in 57.35, while Donna Hosford was second in the senior long jump.
Eric Curran led for much of the junior 800m but was passed in the closing stages to finish second.  Chris Murnane was third in the junior 80m hurdles.       Schools Photos                Schools Results
The cork junior championships take place at CIT on Friday at 7pm and the Kit Kat All Ireland schools championships are in Tullamore on Saturday 4th June.