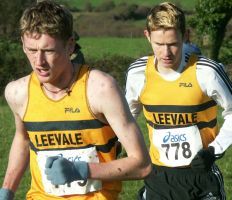 The Cork senior and junior cross country championships were held in Riverstick on Sunday.  It might have been a bright sunny day, but the wind was cold and cutting.  The course was on the side of a steep hill and was quite muddy at the end of it.  It was also very uneven.  For spectators it was one of these impossible courses with most of it out of sight.
Mark Hanrahan went to the front from the gun in the senior race, and by the end of the first of five laps he was on his own as the challenge of Bryan McMahon from Carraig na bhFear fizzled out.
Going down hill on the third lap the only question to be answered was how much the Leevale man was going to win by.  Then they went out of sight again.  By the time they re-appeared Mark was no longer in front, with Jamie McCarthy now in the driving seat.  It remained that way all the way up the hill.  Then, in the blink of an eye, Mark was on his way again and quickly opened up a big lead.  This time there was no catching him and he ran on strongly to win easily.  McCarthy was second with Sean McGrath from East Cork third.  Teamwise 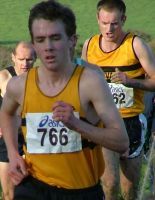 Ian Donovan was 15th, Thomas Maunsell 18th, Graham O’Dwyer 20th, Bernard Twomey 27th and John Hallahan 34th for third team.
Ciaran O’Lionaird and John Shine went head-to-head in the junior race and battled stride for stride for two of the three laps, all the time going further away from the rest of the field.  Ciaran finally got away on the last lap to retain his junior title with John second.  Chris Horgan was 14th and Ross Kelly 17th for third team.
Louise Cavanagh from UCC went from the start of the women’s race and was soon clear.  Claire gibbons gave chase but never really got close enough to challenge and had to settle for second place.  Carmel Parnell, who was second in the Masters over 50 event at the Masters Home Countries international in Dublin the previous day, went off very conservatively.  However, as the race progressed she steadily made her way through the field and finished in the bronze medal position.  A 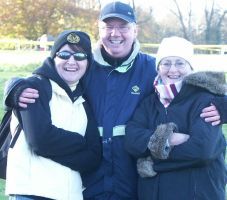 steady run by Jennifer Goggin saw her finish 5th, while Ailbhe Creedon was 10th and Andrea Ryan 13th.  Their excellent running ensured team victory.
A week earlier Ciaran O’Lionaird made it a Munster double when he won the under 18 title on an excellent course in Piltown near Carrick on Suir, having earlier won the under 19 title in Ennis.
The club recently held a function in the Market Tavern to honour some of the big medal winners during the summer.  A big attendance heard club President Finbarr O’Brien speak eloquently of the club’s achievements and the efforts involved in keeping Leevale in the top flight.  Not only were present day members in the Market, but a few from the past also, including Niamh Walsh, Jo O’Leary and Ann Jeffords.
Presentations were made to Carmel Parnell for her gold medal in the 10,000m and silver medal in the 5,000m at the Masters track and field championships in Spain; Ailis McSweeney for her silver medal in the 100m at the World Student Games in Turkey as well as bronze in the relay; Derval O’rourke for her bronze medal in the 100m hurdles at the World student Games and relay bronze; and Orla Barry who won three gold medals at the World Junior Games in Stokemandeville in London in the shot, discus and javelin.  this was part of a whirlwind tour by Orla during the summer that saw her compete in Holland, England (twice), Czech Republic, Finland and Brazil.  Orla also had the distinction of becoming the first female athlete to throw the discus over 20m from a wheelchair.  Pictures of this event are available Here