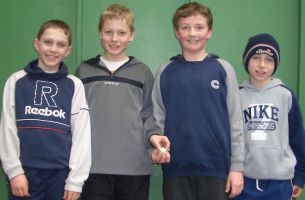 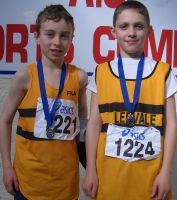 The younger Leevale Athletes performed very well at the Munster indoors in Nenagh over the weekend. For many of these athletes this was their first time at a major meeting and all gained valuable experience. The Under 12 boys deserve a special mention with Denis O’Sullivan securing silver in both the 60m & Long Jump. Sean Fogarty finished 3rd in the long jump. This was followed by a clean sweep in the Shot Put with Daire Walsh, Zack Gibbons and Eric Stam taking gold, silver & bronze respectively. To top this off the team of Denis O’Sullivan, Daire Walsh, Sean Fogarty and Eric Stam won the 4 x 100m relay in a new record time of 58.48 seconds. Other notable achievements were, Rebecca Corbett’s win in the U13 Girls 60m, David Killeen’s win the U14 60m and 3rd in the Long Jump. Kate Humphries second in the U14 Girls 60m.
Congratulations to all the athletes who participated over the weekend
Also this weekend Christopher Murnane represented Leevale and Ireland at the AAA 15 & Under 17 Indoor
championships in Birmingham. Chris performed well in the U15 200m achieving a new PB of 25:69 seconds.
Nenagh Results

On the road there was a big welcome back to Claire Gibbons after giving birth to son Hayden recently.  Competing in the Eagle 5 in Carrigaline she dominated throughout to win from Carmel Parnell, who was having yet another fine run.
There was also a 1-2 in the junior race with Alec Daunt winning from Aaron Hornibrook.
And Mark Hanrahan had a good run at Ras na hEireann in Drogheda to finish 13th behind Seamus Power.
In Belfast the Irish University cross country championships saw Thomas Maunsell finished 18th, just two places ahead of Cillian O’Tuama.
Joe Nagle won the AAA masters o/35 Indoor Shot Put title in Cardiff on Sat 19th of Feb.  Despite the fact that the boat was delayed and he only had 2 hours sleep he still managed to summon up enough energy to take the title. Joe is the first Leevale man to capture a AAA’s master title.