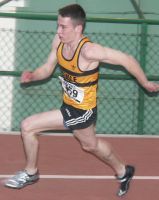 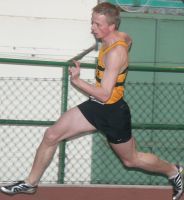 Leevale sprinters were in great form at the AAI Games in Nenagh on Sunday, following up on their excellent performances at the Munster championships a week earlier.  As a result Leevale is well represented at the international meet in Cardiff next Saturday, with Ailis McSweeney in the 60m; Jer O’Donoghue 60m; Derval O’Rourke 60m hurdles; Derek Duff junior 60m; Ciaran O’Lionaird junior 1,500m; and Carl McNamara junior relay.  Good luck to all.
Ailis McSweeney got off to a great start in the 200m on sunday.  However, a re-call due to a false start did not help, and she was clearly not recovered from that when the race got away, finishing in second place behind Ciara Sheehy.  Later  Ailis was in top form when she lined up for the 60m, getting away fast and leading all the way for a

superb win.  Unfortunately, the electronic timing did not work for this race and her hand timing of 7.3 would have gone close to the electronic 7.40 qualifying needed for the European indoor championships.  After competing in Cardiff on Sunday she heads to Glasgow to compete in the 60m and 200m on Sunday.
Jer O’Donoghue was never threatened in his 60m race and he won comfortably in a time of 6.83, a little behind his PB in the Munster championships, but he did have two races that day, in the heats and final.
Darren O’Donovan continued his return after injury with a fine win in the 200m B race in 23.44, and followed up with another win in the 60m in 7.21.
Derek Duff was second in his 200m in 23.31, and followed up with 6th in the 60m in 7.24, while Carl McNamara won his 200m in 23.30.
The under 15 AAA trials resulted in a fine win for Christopher Murnane in the 200m with 26.29, while Aoife Joyce was 5th in her under 15 60m in 8.92.
In the 1,000m, the only middle distance race on the programme, Ciaran O’Lionaird and John Shine finished 5th and 6th respectively after encountering traffic problems throughout the race.