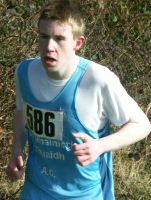 February 18 2005  Leevale sprinters kept their great season going with some great performances at the AAA indoor championships last weekend.  The championships were televised on BBC and made for some of the best TV athletics screened for some time.
Derval O’Rourke and Ailis McSweeney, competing in the 60m hurdles and 60m respectively, both set new Irish records in the course of winning bronze medals in their events.  Both will compete for Ireland in the European indoor championships in Madrid next month.
Jer O’Donoghue, so close to the Irish record in the men’s 60m, had a disappointing run and failed to make the final.
Meanwhile, John Shine took to the country after a brief indoor season.  Competing in the Kit Kat Munster schools championships in Dungarvan he set the early pace and was one of a leading group of four as they started the final lap.  With half a lap to go he was within striking distance of Cathal Dennehy from Limerick but had to settle for second, just 20m or so behind.