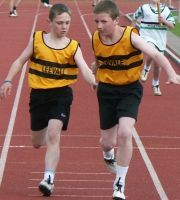 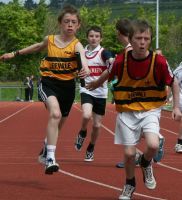 The first section of the Cork underage track and field championships were held on Sunday at the Cork IT track.  A bright sunny day it might have been, but it wasn’t the kind of weather to lie out in..  A core group of Leevale coaches and officials, who look after the younger ages especially, had a field day!  A huge entry from Leevale brought lot’s of success, but, more importantly, means the club can look ahead confidently to the future.
The one downside of the championships was the length of the programme.  It started at 10.30am and went on non-stop to 6pm.  All clubs will have to convince County Board, and AAI as well, that endurance tests such as Sunday are definitely not the way forward.
Well done to all the Leevale athletes who competed in so many events, both track and field.  Impressive wins were recorded by Eric Curran, Chris Murnane, Kate Humphreys, Darragh O’Sullivan, Ciara Naulty, Cillian Lee, T McMahon, Jennifer Murphy, Ciaran O’Lionaird, and Ross 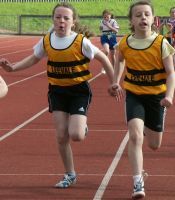 Kelly.  There were also great wins by the boys under 12, 14 and 16 relays teams, as well as the girls under 12.  We can all confidently look forward to another great day next Sunday Complete Results. Photos  Leevale Results
A day earlier, at the Evening Echo South Munster Schools championships, there were impressive wins in the junior boys 80m hurdles from Christopher Murnane, and the junior 800m from Eric Curran, while Alanna Quinn was second in her junior 800m.
The senior events resulted in two excellent wins from Mera O’Connor in the 100m hurdles and Donna Hosford in the long jump.
Alec Crowley easily won the senior 3,000m after a good break from competition, but not before everyone thought he had ‘blown’ it at halfway.  Ciaran O’Lionaird took the lead from the gun in the senior 800m and was chased all the way by John Shine for a good 1-2.  John Collins was a good third in the intermediate 800m.  Part Two is next Saturday.

Sean Conroy set a new PB for 1,500m at a meet in Michigan over the weekend.  Competing for Loyola Chicago he finished a close second in a time of 3:47.69.   This effort 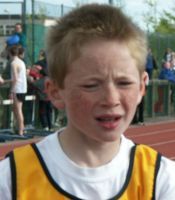 follows some excellent performances in the steeplechase in the past few weeks.
At the Munster junior and under 23 championships at CIT a week earlier, there was more outstanding performances.  The junior men’s 100m came remarkably close to a dead heat.  Greg O’Leary just got the better of Derek Duff, even though both athletes were given the same electronic time of 10.93.  They had to go to thousandths to separate them.  There was no doubt later in the afternoon when Derek had a little to spare over Greg as they both finished 1-2 in the 200m.  They both also had a big say in Leevale wins in the 4x100m and 4x400m relays.
Claire McSweeney recorded a good win in the 400m, while John Shine was a good third in the junior 800m.
Competing in the under 23 1,500m Thomas Maunsell proved strongest of all as he sprinted to victory, and later finished a close second in the 800m.