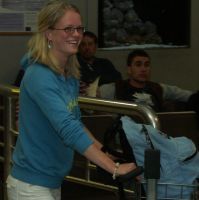 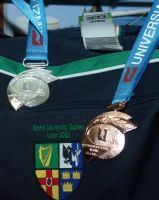 Congratulations to Ailis McSweeney and Derval O’Rourke who completed a marvelous week at the World University Games in Izmir Turkey.  Ailis showed fantastic determination by winning her first round heat of the 100m in 11.67; winning her second round 100m in 11.64; winning her semi final 100m in 11.65; and winning a silver medal in the final of the 100m in 11.68 – won by a Russian in 11.64.  The consistency and determination was a fitting reward to a season that did not always go according ot plan.
After competing in the World championships in Helsinki, where dreadful weather conditions played havoc on performances, Derval made her way to Izmir for the 100m hurdles.  She easily won her first round heat in 13.27 before finishing second in the semi final in 13.09.  In the final she produced one of her best runs of the season to win the bronze medal in a time of 13.02, just 0.01 behind second place in a race won by an Estonian athlete in 12.96.
After these fantastic achievements both Leevale athletes were on the Irish team for the 4x100m relay.  And the week ended in great style as they won bronze medals along with the other members of the team, Anna Boyle and Emily Maher, in a time of 44.65, just 0.02 outside the Irish 4x100m record. 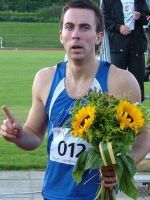 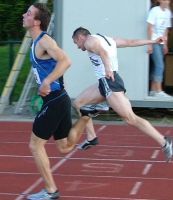 Another Leevale sprinter, Jer O’Donoghue, was also in tremendous form as he competed in the 100m at the Lee Strand Co-operative Creameries international meet at the Riocht track in Castleisland.  The meet was held in conjunction with the official opening of  An Riocht’s new clubhouse.
Jer was in great form and produced the type of performance that many had expected earlier in the season.  His winning time of 10.45 was a PB and had a legal wind reading of +1.9.  However, that time could easily have been faster if he had not slowed before the line to wave his hand in the air, a gesture that could very easily have cost him the race as Gary Ryan dipped to clock 10.47.
Darren O’Donovan was 5th in 11.17 and Derek Duff  7th in 11.18.
The 200m was beset with problems with two false starts, the athletes going almost 100m before the recall gun went at the second attempt.  When they eventually got going Jer pulled up after 80m, while Darren O’Donovan was 5th in 22.59 and Derek Duff 6th in 22.78.
New member Pawel Hazler, still a junior, threw 41.63 to finish fourth in the discus, the same finishing position as Ciaran O’Lionaird in the mile.
Well done to An Riocht for a superb meet, and congratulations to them on their magnificent track and clubhouse.