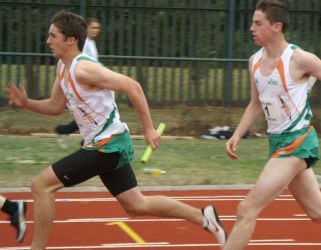 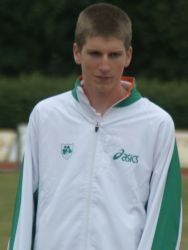 Derval O’Rourke won the silver medal in the 100m hurdles at the european championships, setting a new Irish record in the process.  Over the past few weeks Derval has been in great form, knocking chunks out of her record almost with every race.
Derval’s success has overshadowed the other great achievement by a Leevale athlete.  That of Ailis McSweeney.  Even though she has not been in the greatest of form this season, she was still deemed good enough to be included on the Irish team that competed in the 4x100m in Gothenburg.  Together with Derval, Anna boyle and Ciara Sheehy, they progressed the Irish record once again.  Both Derval and Ailis have now been regular members of Irish teams that have set new marks for the relay over the past few years.
And the man who guided both of them from the very beginning was also in Gothenburg.  Leevale coach John Sheehan 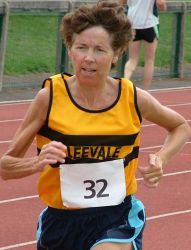 traveled as part of the Irish coaching team and was thrilled with their performances.
Elsewhere, the Celtic International was held at the newly re-vamped RSC in Waterford.  For a new track it was disappointing to find a big bulge on the track in lane 1 at the finish line.
This was a superb competition and all the competitors are sure to have great memories of the event.  Spare a thought for Chris Murnane though.  competing in the under 16 80m hurdles he hit the first flight and never recovered, falling to the track to end his race.  Of all the times for it to happen.  He was clearly distraught afterwards, but then what do you do when you are asked to race over 80m when the distance he runs all the time is 100m.
Later in the afternoon he played a big part in the sprint relay team that finished 1/100th of a second behind winners Scotland. Photos
Another big achievement in recent weeks was the great victory of Carmel Parnell in the 10,000m a the European vets track and field championships in Poland.  She simply destroyed the opposition with a superb display of front running to win the over 50 category.
Meanwhile, Ciaran O’Lionaird has flown the nest and taken up residence at Michigan University on an athletic scholarship.  By all accounts he is settling in well and he carries with him the very best wishes of all in Leevale.