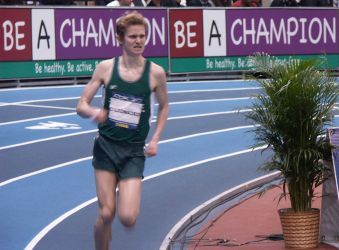 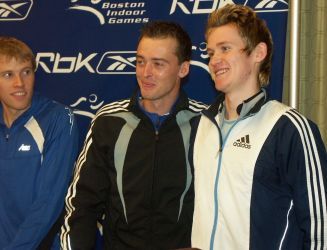 Well done to the organisers of the Reebok Boston Indoor Games, held last Saturday evening.  They put together a world class meeting and their attention to detail was fantastic.  Unlike this side of the world, the organisers treated each and every one of the junior athletes like stars.  All the juniors entered the track at the end of the home stretch and ran to the start line as they were individually announced to the capacity crowd.
All the juniors had their travel, accommodation and meal expenses covered by the organisers, who had a budget of half a million dollars for the meet.  All the juniors were provided with state of the art Reebok gear, with gear bag, singlets and track suit top all engraved with the runners surname and country flag.
Weatherwise it wasn’t too different from Ireland.  Twelve months ago Boston came to a standstill with 3ft of snow covering the whole place.  This time the snow fell the previous Sunday and the remnants covered grass areas and the side of roads where 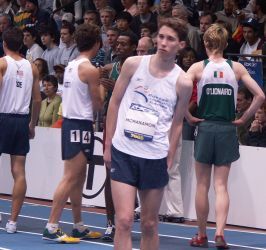 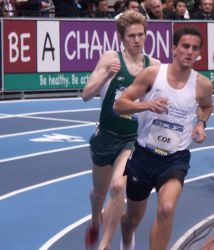 it had been piled up to clear the way.
On Friday and Saturday the Terrier Classic was held at the Boston University track where coaches Mick Byrne and Ray Treacy, as well as Keith Kelly and Martin Fagan were in action.
Boston has three indoor tracks and they are all world class venues.  After his race Alistair Cragg told us “I love this track”.  It would be hard for anyone not to love them.  Now if only we could have just one venue in this country.  Unfortunately, people like Irish Sports Council CEO John Treacy and Sports Minister John O’Donoghue are unlikely to spend too much money on athletics facilities in this country.
With fourteen in the junior race it was vital to get a good start, otherwise traffic problems would make things difficult.  With a staggered start Ciaran was drawn on the outside lanes and got away well when the gun went.  For five laps of the eight lap race he was perfectly placed, although the pace was a bit slow.  Then, with three laps to go Michael Coe from 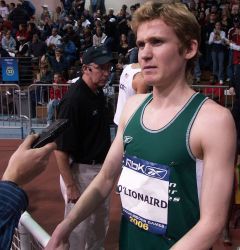 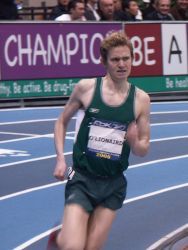 California pushed the pace, with Ciaran the only one to go with him.  Little separated them, but then, with a lap to go Coe increased his advantage and went on to win impressively, with Ciaran a good second.  Ciaran’s converted mile time of 4:09 shows he ran just outside his PB for 1,500m so it was a good exercise all round.
At the Celtic international cross country in Dublin Mark Hanrahan showed his liking for this particular event by posting his second Celtic victory.  Three years ago he dominated the junior race when the competition was held in Belfast, and on Sunday he ran a confident race to win at under 23 level.  At the South Munster Schools cross country championships today his brother Peter was third in the minor boys race.
Derval O’Rourke scored a runaway victory in the 60m hurdles at an indoor meet in Bratislava. Her time of 8.02 equaled her Irish record.  Ailis McSweeney was third in the 60m in 7.47.  Derval recorded another great win when she won the 60m hurdles in Vienna last night in a time of 8.03.