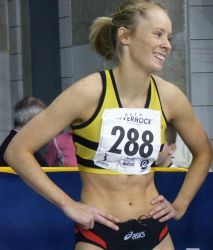 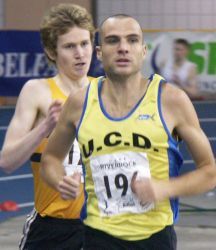 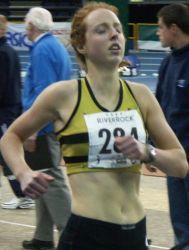 Over the past two weekends Derval O’Rourke has well and truly propelled herself onto the world stage.  In Sheffield she was in great form as she broke her Irish record of 8.02 for the 60m hurdles, set just a week or so before.  That race in Sheffield brought her under the eight second barrier with a 7.98 clocking.
Derval followed up with  an awesome display at the Odyssey Arena in  Belfast over the weekend.  This magnificent venue certainly brought out the best in many athletes, but none more so than Derval.  She was again in awesome form and really made mincemeat of her Irish record with a clocking of 7.90, a time that ranks her number six in the world this season, and puts her in with a realistic chance of a medal at the World Indoor championships in Moscow next month.
The men’s 1,500m produced a very positive effort from Ciaran O’Lionaird.  On Saturday he won his heat in almost casual fashion, in spite of having his race delayed for almost ninety minutes.  The organisers should really be more aware that allowing fifteen minutes to run off eight heats of the men’s 400m is an 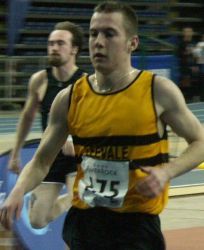 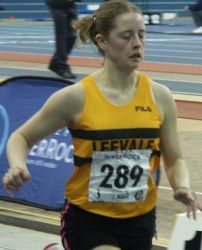 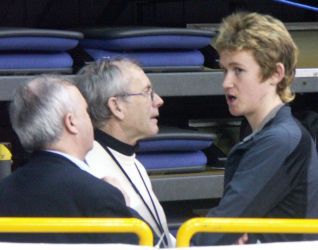 unrealistic target.
Sunday’s final saw James Nolan take the lead from the gun, with Ciaran the only runner in the field to go with him.  Lap after lap just inches separated the pair as they broke right away from the field.  However, the strong early effort told in the closing stages on Ciaran and he was unable to stay with James.  Not only that but he slowed significantly in the last 100m, allowing David McCarthy pass him near the line.  The majority of people at the meet gave Ciaran ten out of ten for what he did.  Unfortunately his time of 3:48.72 was just outside the 3:48.00 qualifying standard for the World junior championships in August.
Ailis McSweeney has been trying hard to reproduce her form from last year.  A move to DCU in Dublin is probably having an effect on her training, although that will change as soon as she settles into her new routine.  Ailis did win her heat of the 60m and then finished a creditable third to Anna Boyle in the final.  With Boyle committed to the commonwealth games Ailis will get to compete in Moscow as she achieved the qualifying standard last year.
Derek Duff showed good form to win the ‘B’ 200m with Carl McNamara third.
Claire McSweeney, returning from injury, almost hit the deck after another runner fell in the ‘B’ 400m final, but stayed on her feet for third place.  Niamh Cremin and Jessika Zebo ran well in the heats but did not reach the finals.
Mark Hanrahan took over the lead in the 3,000m but died a little and finished fifth, while John Shine qualified for the 1,500m final and finished ninth.  Katey Byrd was the club’s other representative in the 60m hurdles.
For a wealthy country it is simply amazing that Ireland still has no national convention centre or national indoor arena.  The championships in the Odyssey Arena once again highlights the remarkable incompetence of our politicians and their advisors to provide adequate facilities in Ireland.  Photos